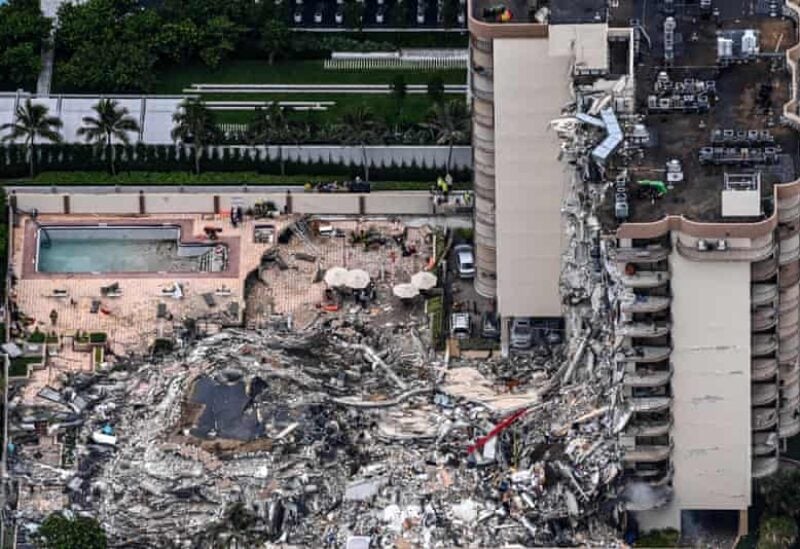 Rescue workers pulled a 10th body from the rubble of a collapsed Florida condominium on Monday, as officials vowed to keep searching for any possible survivors five days after the 12-story building fell without warning as residents slept.

Crews were using cranes, dogs and infrared scans as they looked for any signs of life amid the ruins, hoping air pockets may have formed underneath the concrete that could be keeping some people alive.

There are 151 people still unaccounted for, Levine Cava said.

The cause of the collapse at the Champlain Towers South in Surfside, near Miami, remains under investigation.

A 2018 engineer’s report found serious concrete deterioration in the underground parking garage as well as major damage in the concrete slab beneath the pool deck. The author, Frank Morabito, wrote that the deterioration would “expand exponentially” if it was not repaired in the near future.

But Ross Prieto, then Surfside’s top building official, met residents the following month after reviewing the report and assured them the building was “in very good shape,” according to minutes of the meeting released by the town on Monday.

Reuters was unable to reach Prieto, who is no longer employed by Surfside. He told the Miami Herald newspaper he did not remember getting the report.

The engineer’s report was commissioned in advance of the condo seeking recertification, a required process for buildings that reach 40 years of age. The tower was constructed in 1981. An estimate prepared by Morabito Consultants in 2018 put the cost of repairs at $9.1 million, including electrical, plumbing and work on the facade.

After the meeting, Prieto emailed the town’s manager to say it “went very well. The response was very positive from everyone in the room. All main concerns over their forty year recertification process were addressed.”

Gregg Schlesinger, a lawyer and former general contractor who specializes in construction-failure cases, said it was clear the deficiencies identified in the 2018 report were the main cause of the disaster.

But Donna DiMaggio Berger, a lawyer who works with the condo association, said the issues were typical for older buildings in the area and did not alarm board members, all of whom lived in the tower with their families.

Morabito’s firm was retained by the building in 2020 to prepare a 40-year building repair plan.

Morabito Consultants said on Saturday that roof repairs were underway at the time of the collapse but concrete restoration had not yet started.

“We are deeply troubled by this building collapse and are working closely with the investigating authorities to understand why the structure failed,” the firm said.

Levine Cava vowed to “get to the bottom” of why the building collapsed but said the priority right now is the search-and-rescue mission.

‘TIME IS OF THE ESSENCE’

Rescue workers were culling through the top of the rubble pile on Monday.

The teams included experts sent by Israel and Mexico to assist in the search. An American flag atop one crane rippled in the stiff ocean breeze.

Some relatives of those missing have provided DNA samples to officials, and family members were permitted to pay a private visit to the site by special arrangement on Sunday, Levine Cava said.

The police have identified eight victims, including a couple married for nearly 60 years and a mother whose teenage son is one of the few known survivors.

Among the victims were Luis Andres Bermudez, 26, and his mother Ana Ortiz, 46, whose bodies were recovered on Saturday.

At a makeshift memorial a block away, a laminated poster with a smiling photo of Bermudez and “Mom Ana Ortiz” hung from a chain-link fence, along with other “missing” signs. Flowers and children’s toys were strewn about the fence.

In a letter he shared on Facebook, Bermudez’s father wrote that his son was “My Angel My everything.”

“I LOVE you and love you forever,” Luis Didi Bermudez wrote. “You are and will be the best in my life.”

Given the scores of those still missing, the disaster may end up one of the deadliest non-deliberate structural failures in U.S. history.

Ninety-eight people perished when the roof of the Knickerbocker Theatre in Washington, D.C., gave way from the weight of snow during a silent movie screening in January 1922. Two interior walkways collapsed into the lobby of the Hyatt Regency hotel in Kansas City, Missouri, during a dance party in July 1981, killing 114.