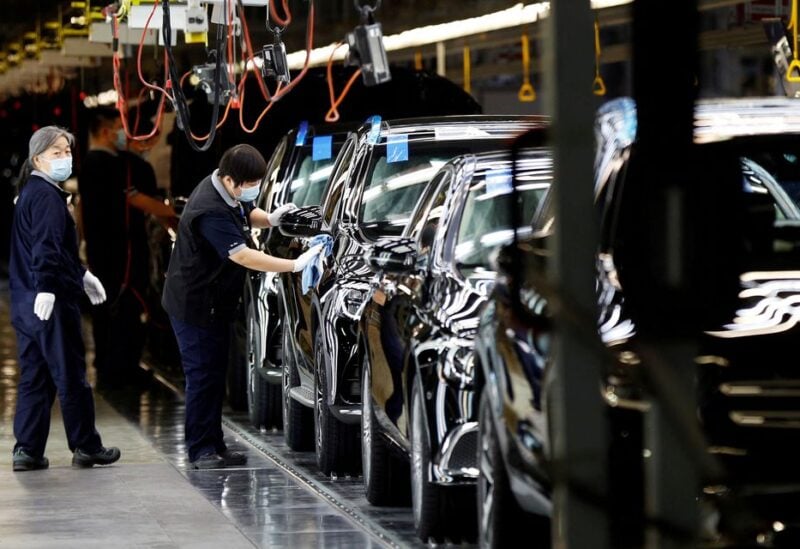 Employees work on the production line during an organised media tour to a factory of Beijing Benz Automotive Co (BBAC), a joint venture by BAIC Motor and Mercedes-Benz, in Beijing, China February 17, 2022. REUTERS/Florence Lo/File Photo

Factory activity in China slowed in May as COVID-19 restrictions in major manufacturing hubs were loosened, but demand and production remained stifled, heightening concerns about economic growth in the second quarter.

The official manufacturing purchasing managers’ index (PMI) rose to 49.6 in May from 47.4 in April, the National Bureau of Statistics (NBS) said on Tuesday, beating forecasts in a Reuters poll for 48.6.

China’s factory slowdown is affecting production lines in other major Asian economies with both Japan and South Korea reporting sharp declines in output.

While the PMI hit a three-month high, it remained below the 50-point mark that separates contraction from growth for the third straight month.

“It shows the impact of COVID-19 outbreaks in May have not fully ended, leaving the economic outlook grim since the second quarter in 2020,” said Pang Ming, chief economist at Huaxing Securities.

Declines in China’s midstream and downstream production were larger than they were upstream and small firms were hit harder than large firms, Pang said.

“This showed manufacturing production and demand have recovered to varying degrees, but the recovery momentum needs to be strengthened,” said Zhao Qinghe, senior statistician at the NBS, in a statement accompanying the data.

Though restrictions in the major manufacturing hubs of Shanghai and in the northeast eased in May, analysts said the output resumption was restrained by sluggish domestic consumption and softening global demand.

Sheana Yue, an economist at Capital Economics, said although activity has started to rebound as COVID-19 curbs ease, the recovery is likely to remain tepid.

“Indeed, there continues to be signs of supply chain disruptions in the survey breakdown,” Yue said. “Delivery times lengthened further while firms continued to draw down their inventories of raw materials, although at a less rapid pace than in April.”

That would further hamper exports, which lost momentum this year, casting a shadow over the economic rebound.

Many analysts expect the economy to shrink in the April-June quarter from a year earlier, compared with the first quarter’s 4.8% growth.

China’s economy was ravaged by strict restrictions in April as the country grappled with the worst COVID-19 outbreak since 2020, with economic difficulties in some aspects now worse than two years ago.

In line with the factory weakness, services also remained soft. The official non-manufacturing PMI in May rose to 47.8 from 41.9 in April.

As consumers were confined to homes, retail sales in April shrank 11.1% from a year earlier, the biggest contraction since March 2020 with catering services and auto sales particularly hit.

Activity in contact-intensive sectors was still in contraction, pointing to large pressure on the services industry, the PMIs showed.

The employment sub-index in the services sector slipped to 45.3, down 0.5 of a point from April, showing sustained job market pressure.

In a politically sensitive year, that could raise challenges for the government, which has prioritised job stabilisation.

China’s official composite PMI, which includes both manufacturing and services activity, stood at 48.4, up from 42.7.

“(China will) push the actual lending rates steadily lower” and dole out cash subsidies for firms that hire college graduates until the end of year, according to a statement of the State Council.