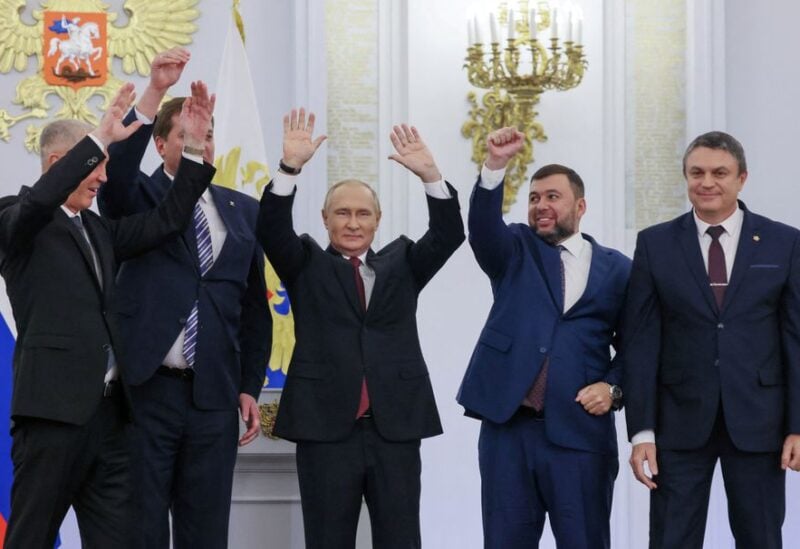 In a pomp-filled Kremlin event, a defiant Vladimir Putin declared Russia’s annexation of a slice of Ukraine, declaring Moscow would succeed in its “special military operation” even as he faced a potentially major new military reversal.

The declaration of Russian sovereignty over 15% of Ukraine, the largest annexation in Europe since World War II, was roundly condemned as unlawful by Ukraine and Western countries. New sanctions have been declared by the United States, the United Kingdom, and Canada.

A furious Vladimir Putin announced Russia’s annexation of a chunk of Ukraine in a pomp-filled Kremlin ceremony, vowing Moscow would prevail in its “special military operation” even as he faced a potentially huge new military reversal.

Ukraine and Western countries unanimously criticized Russia’s proclamation of sovereignty over 15% of Ukraine, the largest annexation in Europe since World War II, as illegal. The United States, the United Kingdom, and Canada have all issued new sanctions.

Putin signaled his readiness to continue the battle for a “greater historical Russia” in one of his toughest anti-American speeches in more than two decades in power, slamming the West as out to destroy Russia and accusing Washington and its allies of blowing up the Nord Stream gas pipelines without evidence.

However, US President Joe Biden stated that it “was an intentional act of sabotage, and now the Russians are spewing out disinformation and falsehoods,” adding that Washington and its partners will send divers to investigate.

“They have chosen to stay with their people, their motherland, to bear its fate and triumph alongside it. We have the truth on our side. Russia is on our side!” Putin informed his country’s political elite, who had assembled in one of the Kremlin’s largest rooms to witness the annexation paperwork’ signing.

“We will defend our territory with all of our might and all of our resources,” he continued, urging the “Kyiv dictatorship to immediately halt hostilities and return to the negotiating table.”