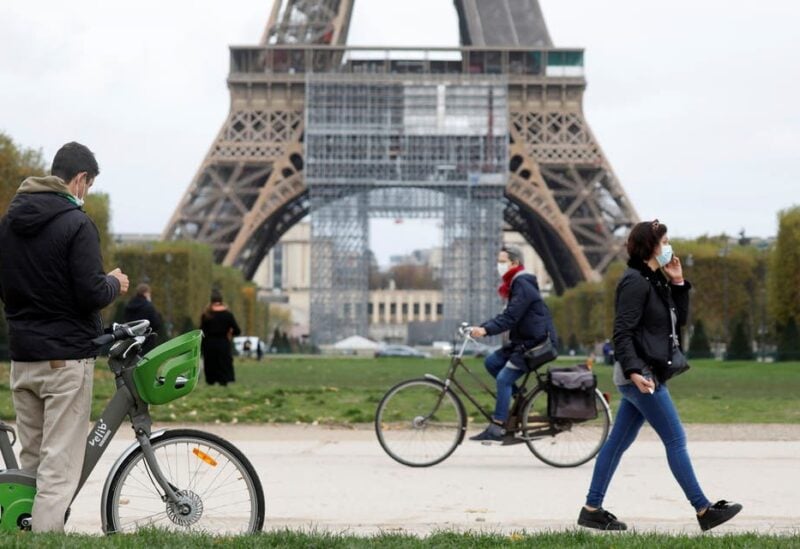 People pass by the Eiffel Tower before the national lockdown introduced as part of the new COVID-19 measures to fight a second wave of the coronavirus disease, in Paris, France, October 29, 2020. (File photo: Reuters)

Rising coronavirus infection rates, driven by the fast-spreading Delta variant, are forcing more countries around Europe to re-impose restrictions that could cast a pall over the region’s economic recovery prospects.

French President Emmanuel Macron’s announcement on Monday of mandatory proof of vaccination or negative tests for public spaces including cinemas and trains comes days after Portugal, the Netherlands and parts of Spain renewed curbs.

Even in England, which is going ahead with a July 19 removal of remaining COVID-19 restrictions, Prime Minister Boris Johnson has changed his messaging to urge caution.

Johnson’s government – which says that one of the world’s fastest inoculation drives has largely broken the link between infections and serious illness – judges it safer to re-open now rather than in the winter flu season.

Politicians across the continent are refusing for now to countenance returns to outright lockdowns they fear could stymie the strong rebound in activity during the last quarter. But the caveats are mounting.

France’s finance minister said on Tuesday he now expected economic growth for 2021 to be around 6 percent, up from a previous 5 percent target, but warned that could be revised down again if the highly infectious Delta variant took hold.

“The Delta variant would be the only obstacle,” Bruno Le Maire told Franceinfo radio.

That chimed with a survey by Reuters in which nearly 90 percent of economists polled said that new COVID-19 variants were the biggest risk to the euro zone economy, which they currently expect to grow at a healthy 4.5 percent this year.

A Reuters coronavirus tracker shows that infections, while in most cases well below their peaks, are rising in all but a handful of European countries.

Data collated by Oxford Economics shows that Delta now accounted for the majority of cases in Britain, Portugal and Austria, and over 40% of cases in Germany, Spain and Denmark.

It said the economic impact was hard to predict but that countries with higher vaccination rates could take some comfort from the muted rise in hospitalization and death rates in Britain and Israel.

That could already be happening in Portugal, where Lisbon’s restaurant owners, already struggling to survive without the usual influx of summer tourists, now must require tests or a vaccination certificate for indoor dining.

The Dutch government cited Delta’s impact as it re-imposed curbs on nightclubs, festivals and restaurants on Friday. In Spain, the Catalonia region has cut bar opening hours and towns in neighboring Valencia have been authorized to impose curfews.

German officials say existing coronavirus measures should be maintained until more of the population has been vaccinated.

They have raised concerns about waning discipline around social distancing and mask-wearing.

Economy Minister Peter Altmaier told a local newspaper that a new lockdown would be “absolutely the worst thing and to be avoided at all costs.”

Officials across Europe are looking closely at what happens in England, with many of them regarding Johnson’s re-opening plan as a risky experiment.

There, the picture is rather complicated by a decision to leave in place for now a requirement for workers to self-isolate when notified by an official app – a move that has already led to big labor shortages in hospitality and other sectors.

In a note entitled “A ‘V’-shaped recovery this is not,” Bank of America cited that and other snags to conclude that sticking to its in-house target of quarter-on-quarter growth of 3.0 percent now looked “challenging.”

“This should be a warning to policy-makers that in a world where policy tools are limited and uncertainty high, the risks of over-confidence in the recovery loom larger than the risks of the economy running hot,” it said.