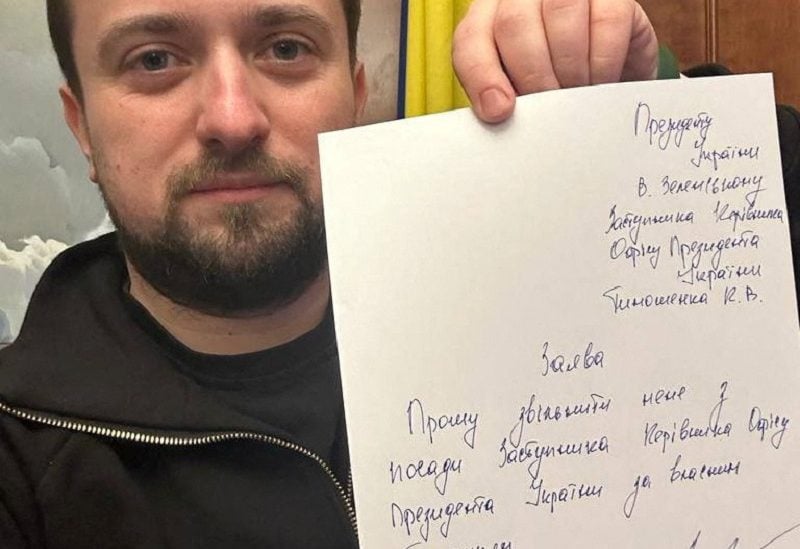 Deputy head of Ukraine's Presidential Office Kyrylo Tymoshenko holds up a note written on a sheet of paper as he tenders his resignation, asking President Volodymyr Zelenskiy to relieve him of his duties, in this picture taken at an unknown location and released on social media on January 24, 2023. Kyrylo Tymoshenko via Telegram/via REUTERS THIS IMAGE HAS BEEN SUPPLIED BY A THIRD PARTY. MANDATORY CREDIT. NO RESALES. NO ARCHIVES.

Asking President Volodymyr Zelensky on Monday to relieve him of his duties, the deputy head of Ukraine’s presidential office, Kyrylo Tymoshenko, presented his resignation.
“I thank the President of Ukraine Volodymyr Zelensky for the trust and the opportunity to do good deeds every day and every minute,” Tymoshenko wrote on the Telegram messaging app.
Tymoshenko gave no reason for his resignation. Ukrainian media had reported that Tymoshenko might be part of the personnel shake-up Zelensky announced.
A decree accepting Tymoshenko’s resignation was published on the president’s website.
Zelensky said on Monday that personnel changes would be announced this week in the government, the regions and in the security forces after allegations of corruption nearly a year into Russia’s invasion.
Tymoshenko, 33, had been the deputy head of presidential office since 2019, overseeing regions and regional policies. He also worked with Zelensky during his election campaign, overseeing media and creative content.
Since the start Russian invasion in Ukraine of February 2022, according to Ukrainian media, Tymoshenko had been embroiled in several scandals related to his personal use of expensive cars. Tymoshenko has denied all the allegations.
Russia calls the invasion a “special operation.”