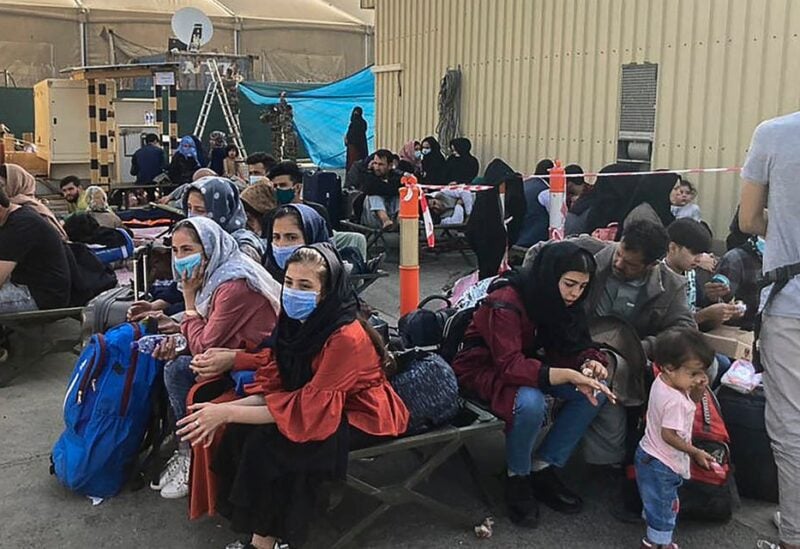 People wait to be evacuated from Afghanistan at the airport in Kabul on August 18, 2021 following the Taliban stunning takeover of the country. (File photo)

Thousands of Afghans were packed Thursday between Taliban checkpoints and a US-imposed ring of steel around Kabul’s main airport, desperate to get aboard any flight out following the return of the extremist group.

Even more were mobbing foreign embassy compounds in the capital, as rumors spread that visas were up for grabs or safe passage on offer at least as far as the airport.

Unconfirmed reports on social media say several people have been killed as US forces and the Taliban struggle to contain the desperate throngs on their respective sides of an unofficial no-man’s land.

“I went to the airport with my kids and family… the Taliban and Americans were shooting,” said one man who until recently had worked for a foreign NGO.

“Despite that, people were still moving forward (to get in) because they knew a situation worse than death awaited them outside the airport.”

There have been chaotic scenes since the weekend, when the Taliban drove unopposed into the capital after a two-week lightning offensive that capped a simmering 20-year insurgency.

Distressing pictures and video have emerged of people desperately trying to get aboard any flight leaving — even resorting to climbing on a US military Hercules as it rolled down the runway for take-off.

Some semblance of order has been restored, but thousands have been left stranded between the Taliban and US lines — clinging to an unrealistic hope that they will be let in and evacuated.

Many do have visas for a foreign destination — and say they were promised evacuations — but they simply can’t get in.

“I spoke to my friend who is there and he has a letter from Spain saying he can leave with them, but when he tries to go to the gate they threaten to shoot him,” a man who asked not to be identified told AFP.

“The Spanish people tell him if he gets inside, he will be ok, but he can’t get inside.”

The Taliban have provided official escorts for some foreign embassies — taking their nationals as well as Afghans — and they are being allowed in by the Americans.

But even that journey — which can take several hours for just a few kilometers (miles) is fraught with heartbreak.

“There were people beating on the windows of the bus, trying to get inside,” said a woman who made it through on Wednesday.

“The Taliban with us fired in the air to chase them away.”

There was desperation near the diplomatic enclave as well Thursday, as thousands clamored to get the attention of anyone at now largely deserted embassies.

“I was told that if I get my name and my details and my phone on a paper to the French embassy they will take me,” said one man.

Hundreds of people sat on pavements begging for scraps of paper or to borrow a pen to do the same.

Washington said Wednesday the Taliban were reneging on pledges to allow Afghans who worked with the US and its allies out of the country.

“We have seen reports that the Taliban… are blocking Afghans who wish to leave the country from reaching the airport,” Deputy Secretary of State Wendy Sherman told reporters.

“We expect them to allow all American citizens, all third-country nationals and all Afghans who wish to leave to do so safely and without harassment.”