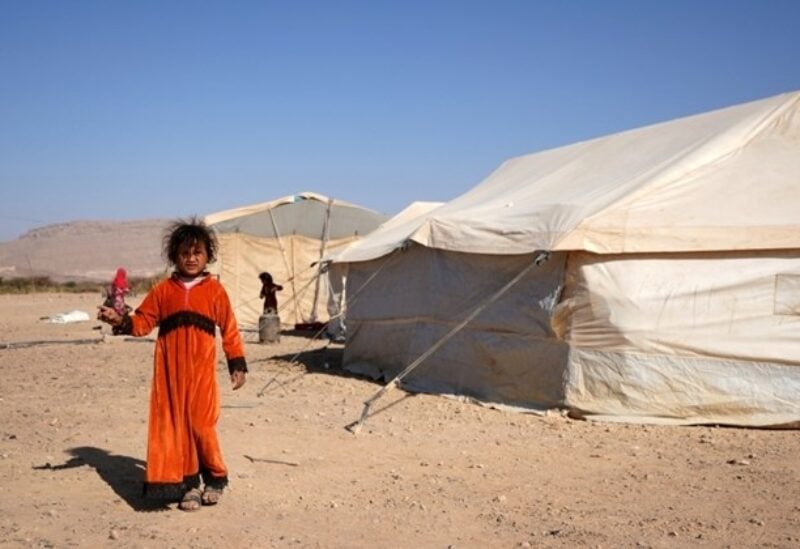 MARIB, Yemen: As the sound of gunfire grew closer, Mahfouz Ahmed knew to scoop up his children and run, before getting caught in the line of fire between Yemen’s warring sides.

The Al-Zor camp where they had been living for four years was no longer safe, as the Iran-backed Huthi rebels drew near in a major offensive against the northern city of Marib and its nearby oil fields.

The family collected what few possessions they had, including a small television, a cooking burner, and a few pots and pans, and headed to Jaw al-Naseem, another camp closer to Marib, which is the Saudi-backed government’s last northern bastion.

“We were about 600 families living in Al-Zor camp, and now they have dispersed,” Ahmed told AFP, as he sat on the floor of a green tent in Jaw al-Naseem, just three kilometers (less than two miles) from the city.

“Some are living with relatives and others — three or four families, sometimes even seven — are living in one tent. Only God knows what kind of situation this is.”

Ahmed and his family first fled their home in the battleground city of Taez in 2016, part of a huge exodus of Yemenis for whom Marib province became a sanctuary of sorts in a country ravaged by years of war.

Around 140 sites have sprung up in the region to provide basic shelter for the displaced, who number up to one million according to some estimates.

Al-Zor is among a cluster of 14 displacement sites in Marib’s Sirwah district — a flashpoint area on the road to the rebel-held capital Sanaa.

Marib has been menaced by fighting in recent weeks as Saudi-backed government troops struggle to defend the city.

All the camps could be forced to empty as the Huthis intensify their campaign for the province, a huge prize that would consolidate their control of the north and give them possession of Yemen’s richest oil and gas fields.

The International Organization for Migration (IOM) has said that Sirwah has been hit hardest since the rebel offensive resumed this month, with some 1,048 families — averaging six members each — displaced so far.

Ahmed’s wife, Huriya, said the situation has become unbearable for the couple and their four children.

“They do not study. We can’t find schools or teachers, and we don’t know what to do for them,” she told AFP, as two girls sat on the bare floor watching cartoons.

“We are two families in one tent with the bathroom and kitchen inside,” said Huriya, her voice quivering under the niqab covering her face.

Until early last year, life in Marib was relatively peaceful despite the civil war that erupted in 2014.

With its proximity to the Saudi border, the province was largely untouched by the first years of conflict, and even flourished as those who sought sanctuary opened businesses and restaurants.

But as the front lines shift, and air raids by Saudi Arabia and its allies pound the area, there is new peril for civilians, whether they are in dismal camps, lodging with relatives, or sheltering at other informal sites including abandoned buildings.

The fighting shows no signs of abating despite heavy losses on both sides.

The United Nations warned last week of a potential humanitarian disaster if the fight for Marib continues, saying it has put “millions of civilians at risk”.

Yemen is already enduring what the UN says is the world’s worst humanitarian crisis, with famine again stalking the country.

Nationwide more than 3.3 million people have been displaced, making them vulnerable to outbreaks of cholera, malaria, and dengue fever due to lack of proper sanitation and health care.

At Jaw al-Naseem camp, the most basic of services are absent. Children run around barefoot, some playing on a makeshift swing set, others with sand and rocks.

“The situation is dire and most households are in urgent need of shelter and non-food items, water and sanitation, health and food assistance,” said IOM spokeswoman Olivia Headon.

Displacement is nothing new for Ali al-Tahami, who first fled his home in the Red Sea port city of Hodeida for nearby Dhamar, and then to a camp outside Marib before ending up at Jaw al-Naseem.

“We were faced with a very difficult living situation. We fled when the problems of war came to us,” he told AFP.

“My children have gotten sick because of the harsh cold, and we don’t have blankets or water tanks,” he said. “We can’t take any more of this.”