Donald Rumsfeld, architect of war in Afghanistan, is laid to rest 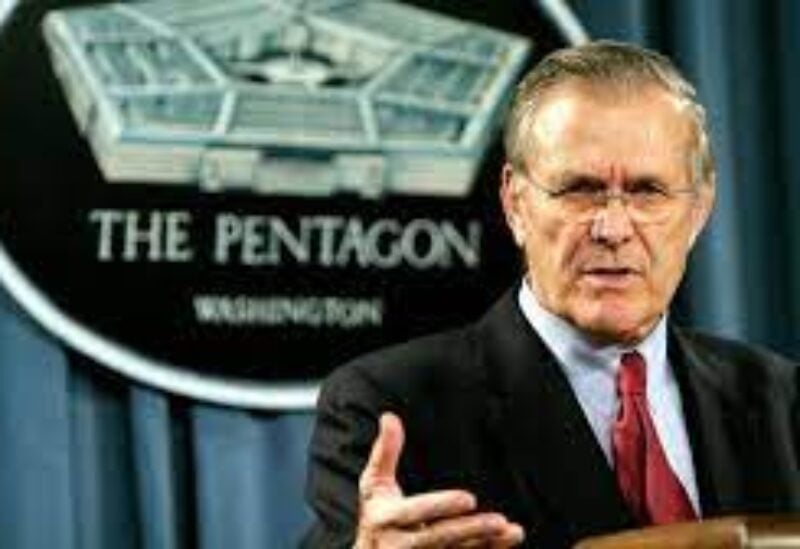 A horse-drawn caisson with a flag-draped coffin passed slowly through the gates of Arlington National Cemetery on Monday, a hushed tableau against a city loud with recriminations about the lost war in Afghanistan.

The cortège carried Donald Rumsfeld, a hard-charging, two-time secretary of defense and one of the war’s chief architects, whose burial on a sweltering August afternoon served as another coda to the 20-year conflict.

Rumsfeld died June 29, at 88, of complications related to multiple myeloma. The date for his interment and an earlier private funeral service Monday at Fort Myer, Virginia, had been set long before, but the timing meant that Rumsfeld was laid to rest during the same kind of shell shock as on Oct. 7, 2001, when the United States launched its first airstrikes in Afghanistan.

And yet, the ceremonies seemed to take place in a contained, parallel universe, sealed off from the strife of Washington. “This was very much about the man and his times, and not any particular issue of the day,” said Larry Di Rita, a top deputy to Rumsfeld at the Pentagon during the George W. Bush administration.

Say what you will about the man known as “Rummy,” and many have, harshly, for turning away from Afghanistan and waging a war in Iraq that left thousands of Americans and hundreds of thousands of Iraqis dead and ultimately wrecked the end of Rumsfeld’s political life. But at Memorial Chapel at Fort Myers, the eulogists recalled a different man.

“Our capital city has many familiar types,” former Vice President Dick Cheney, Rumsfeld’s longtime ally, recalled of his closest friend, according to his prepared remarks and confirmed by guests at the funeral. “Yet in all my years around this company town, I have never heard anyone described as ‘the Rumsfeld type.’ There is no such thing because nothing about Don was typical or derivative or standard-issue.”

Cheney also brought up some of Rumsfeld’s signature maxims, which Rumsfeld would sometimes adapt from familiar Washington sayings. “Harry Truman supposedly said, ‘If you want a friend in Washington, get a dog,’ ” Cheney said. “To this, Don added the Rumsfeld corollary: Get a small dog — he might turn on you.”

The words “Afghanistan” or “Iraq” were barely spoken by Cheney and a procession of other eulogists, among them Richard Myers, chairman of the Joint Chiefs of Staff at the outset of the wars in Iraq and Afghanistan, and Victoria Clarke, Rumsfeld’s longtime communications aide at the Pentagon.

Clarke invoked one of Rumsfeld’s favorite sayings, or so-called Rumsfeld Rules. “Cemeteries are filled with irreplaceable people,” Clarke said before the burial, quoting her former boss, but amending the rule in his honor. “Arlington National Cemetery will soon have someone who is truly irreplaceable.”

Details of the funeral and burial were closely held by the Rumsfeld family and none were released publicly after it was over. Guests included Defense Secretary Lloyd Austin and Gen. Mark Milley, chairman of the Joint Chiefs of Staff, who knelt before Rumsfeld’s widow, Joyce, who was in a wheelchair, and presented her with the flag from her husband’s coffin.

Others there were Rep. Liz Cheney, R-Wyo., and Paul Wolfowitz, Rumsfeld’s No 2 at the Pentagon who pushed hard for the war in Iraq.

“Mostly, it was just a lot of people who hadn’t seen each other in a long time, in some cases since Rumsfeld left the Pentagon,’’ said David Hume Kennerly, a presidential photographer whom Rumsfeld brought on as the official chronicler of President Gerald Ford’s White House when Rumsfeld was Ford’s chief of staff. “And there were a lot of stories being shared.”

The stories surfaced in the eulogies, which were often drawn from the inside of the Pentagon, where Rumsfeld served as defense secretary to Ford in the 1970s and a quarter century later to President George W. Bush.

“There’s 9/11, of course,” Clarke recalled, when Rumsfeld left his office to assist rescue crews after a hijacked American Airlines plane crashed into the western side of the Pentagon, killing all 64 people aboard the jet and an additional 125 inside. “Many of us were in the building trying to figure out what had happened,” Clarke said. “He’s the one who went and found out.”

A former Navy pilot, Princeton-educated wrestler and competitive squash player into his 80s, Rumsfeld’s aggressive style was well-established. “He gave no quarter, and there was often blood at the end of the match,” said Di Rita, a frequent squash opponent of his boss. “When you played with him, it was basically just Don Rumsfeld being Don Rumsfeld.”

Clarke also told the story of seeing Rumsfeld walk down to the Pentagon briefing room and pick up a misshapen paper clip he spotted in the hallway. He spent the meeting twisting and reworking the lonely paper clip back into fighting shape.

“Good as new,” he told Clarke, holding up the paper clip as he left the briefing room.

A few hours later, a document was sent down to Clarke’s office, held together with that same paper clip. “Saving the taxpayers’ money,” Rumsfeld scrawled on a yellow Post-it note affixed to the restored object.

Cheney described the tumultuous period after Richard Nixon resigned the presidency in 1974, and Ford was about to name his own vice president. Rumsfeld was a finalist for the job, and happened to be at Cheney’s home in Bethesda, Maryland, listening on a kitchen radio as the process culminated.

“We heard news reports describing the scene at the Rockefeller estate,” Cheney recalled, referring to Ford’s eventual choice, former New York Gov. Nelson Rockefeller. There was a fleet of sedans outside the mansion, Cheney noted, with family jets primed to fly the Rockefeller entourage to Washington.

“Don laughed at the superior resources Rockefeller brought to the competition,” Cheney remembered. “He said to me, ‘Here’s Nelson Rockefeller with planeloads of people flying down from New York, and all I’ve got is you, Cheney.’ ”

Participants said the assembly erupted into laughter, led by the chuckling Cheney himself. It took a few seconds for solemnity to be restored. “Until we meet again, goodbye, old friend,” Cheney said at the close of his remarks, his voice catching, according to a guest, in a rare hint of public emotion.

“I had responsibilities and experiences far beyond anything I could have ever known,” Cheney said, crediting Rumsfeld for all of them. “He decided he could trust me and it changed my life.”

Left unsaid, for better or for worse: It changed history, too.