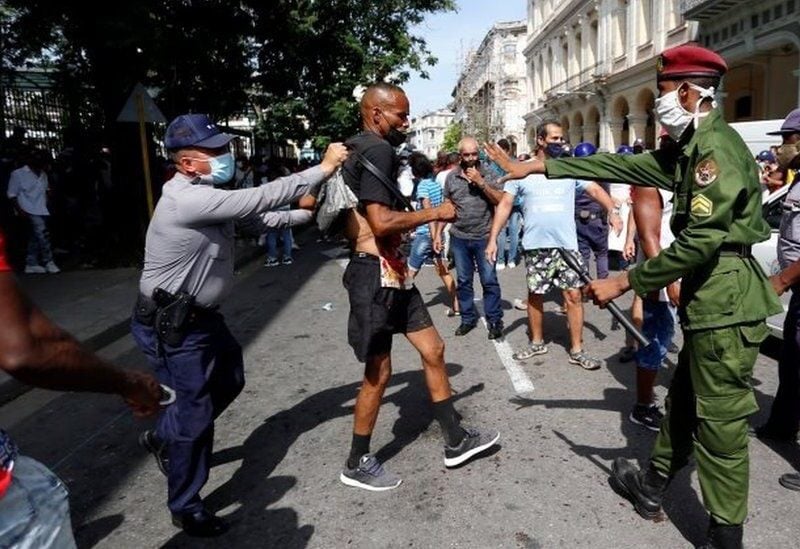 Thousands of Cubans have marched to the streets in Havana and other towns, demanding vaccines and food as the country struggles to recover from the global COVID-19 pandemic.

According to the Miami Herald, some denounced President Miguel Diaz-Canel, chanting “down with the dictatorship.”

Diaz-Canel blamed the unrest on the United States in a speech to the country.

People screamed, “We are not frightened!” as they marched through the streets on Sunday, according to videos posted on social media. “Freedom! Freedom!” shouts the crowd.

Analysts believe the protests are uncommon in a country where dissidents are closely monitored by the police.

The island is facing one of its greatest socioeconomic crises since the Soviet Union collapsed as well as a rise of deadly coronavirus outbreaks.

Worsening conditions, such as the third wave of the coronavirus pandemic, as well as a frightening scarcity of food, medication, and other necessities, are among the causes for the protests, which are among the greatest since the dictatorship began in the 1950s. Many protesters attempted to broadcast the protest live on their phones, but Cuban officials cut down internet service for the whole day.

According to the American daily newspaper Miami Herald, videos live-streamed on Facebook showed thousands of people walking and riding bikes and motorcycles along streets while chanting “Freedom!” “Down with Communism!” and “Patria y Vida” — Homeland and Life — which has become a battle cry among activists after a viral music video turned the revolutionary slogan “Homeland or Death” on its head.

On Sunday, US National Security Advisor Jake Sullivan issued a warning to Cuba about any targeting of those participating in the unprecedented protests against the Communist government.

“The US supports freedom of expression and assembly across Cuba, and would strongly condemn any violence or targeting of peaceful protesters who are exercising their universal rights,” he said on Twitter.