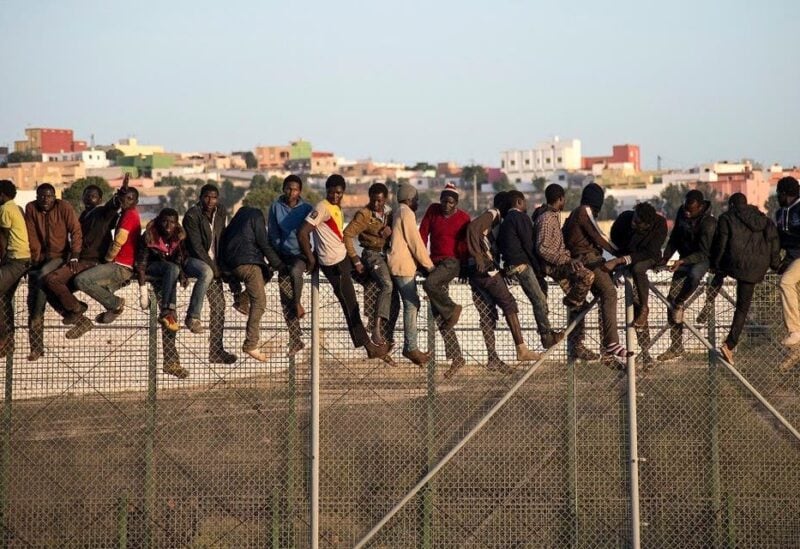 A file photo of would-be immigrants stand atop a boarder fence separating Morocco from the north African Spanish enclave of Melilla. (AFP)

Dozens of migrants scaled a fence and crossed the border from Morocco into the Spanish enclave of Melilla on Monday, just weeks after a similar crisis that saw thousands cross the frontier and clash with security.

Migrants routinely try to enter Melilla and Ceuta, Spanish territories near the Moroccan border – Europe’s only land crossing with Africa.

They either swim along the coastline, climb border fences or hide in vehicles, in what can be dangerous or deadly attempts to make it to Europe.

“A total of 119 people got in, all of them men,” a spokesman for the Spanish government’s delegation in Melilla said about the latest incident.

Some 200 people had tried to make the crossing, and five officers from Spain’s Civil Guard police force and a migrant were slightly injured, he added.

Those who entered Spain were taken to a government-run center for migrants where they will be tested for the coronavirus.
Ceuta and Melilla have long been a magnet for migrants desperate to escape grinding poverty and hunger.

Last month, Spain was caught off guard when as many as 10,000 people, mainly youths, surged into Ceuta as Moroccan border guards looked the other way.

The incident occurred during a diplomatic crisis between Spain and Morocco over the presence of the ailing leader of Western Sahara’s independence movement at a Spanish hospital, with the border breach widely seen as a punitive move by Rabat.

Although the Polisario leader left Spain on June 2, diplomatic relations have remained tense.

Moroccan security forces “cooperated actively” during Monday’s rush on the border to prevent migrants from entering Melilla, according to the Spanish government’s delegation in the territory.