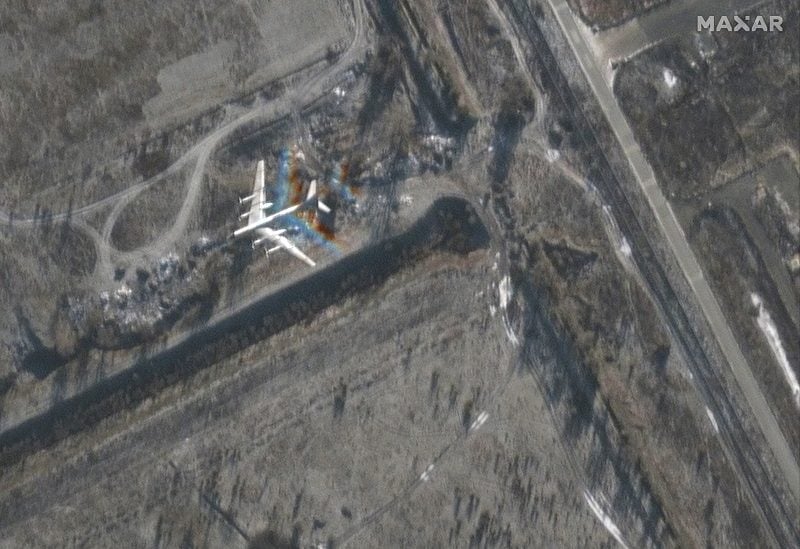 A satellite image shows bomber in flight at northeast of Engels Air Base in Saratov, Russia, December 3, 2022. Satellite image 2022 Maxar Technologies/Handout via REUTERS THIS IMAGE HAS BEEN SUPPLIED BY A THIRD PARTY. NO RESALES. NO ARCHIVES. MANDATORY CREDIT. DO NOT OBSCURE LOGO

Holding each other responsible for attacks, both Russia and Ukraine are wrapped in a tussle. Russia hit Ukraine with a barrage of missiles on Monday, leaving much of country in the dark. Meanwhile, Moscow said Ukrainian drones attacked two air bases deep inside Russia hundreds of miles from front lines.
Electricity was restored in several parts of the country just days back, but Moscow hit more thermal plants resulting in blackouts at a time when the country was preparing to end emergency power cuts. The temperatures have dropped below zero and Ukrainians are having a hard time dealing with the extreme cold without heat.
Ukrainian President Volodymyr Zelensky said that at least four people died in the Russian missile attacks. He informed that most of around 70 missiles were shot down by the air force. Energy workers are working to restore power supplies, he said.
The Ukrainian drones targetted two air bases at Ryazan and Saratov in south-central Russia, Moscow said. Three servicemen died and four were injured. The drones, flying at low altitude, were intercepted by air defences and shot down. The pieces damaged two aircraft.
The Engels air base near the city of Saratov houses bomber planes belonging to Russia’s strategic nuclear forces.
“The Kyiv regime, in order to disable Russian long-range aircraft, made attempts to strike with Soviet-made unmanned jet aerial vehicles at the military airfields Dyagilevo, in the Ryazan region, and Engels, in the Saratov region,” the Russian defence ministry said.
The Russian defence ministry called the drone strikes a terrorist act aimed at disrupting its long-range aviation.
In response, Russia carried out “massive strike on the military control system and related objects of the defences complex, communication centres, energy and military units of Ukraine with high-precision air- and sea-based weapons”. It said that all 17 designated targets were hit.
Earlier, arms stores and fuel depots in regions near Ukraine were hit by blasts and at least seven warplanes in Crimea were knocked down. Around two months back, the bridge linking Russia with Crimea was also hit by mysterious explosion. Kyiv has never openly claimed responsibility for any of the attacks, saying that they were “karma” for Russia’s invasion.
“If something is launched into other countries’ air space, sooner or later unknown flying objects will return to (their) departure point,” Ukrainian presidential adviser Mykhailo Podolyak tweeted Monday.