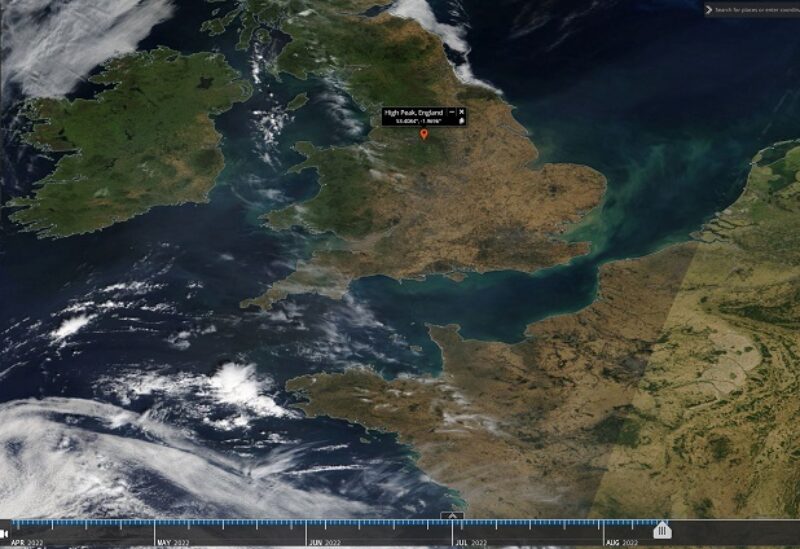 NASA Worldview shows drought in Britain August 13, 2022 in this handout image obtained by Reuters on August 14, 2022. NASA Worldview/Handout via REUTERS THIS IMAGE HAS BEEN SUPPLIED BY A THIRD PARTY. MANDATORY CREDIT

After the extreme hot weather conditions that hit the country, the UK is now bracing for thunderstorms that are expected to last several days. While it might sound like a sign of relief, meteorologists say it is far from it. Much of the country is facing dry conditions, even leading to wildfires in some places. The lack of rain has worsened things and left the ground parched.

The latest warning of thunderstorms for four days this week can lead to flash floods as instead of soaking into the ground, the water is expected run off the soil. Experts say there is a high probability of this happening since dry land does not let water in easily, which leads to water pooling and ultimately running off the ground, causing flash floods.
The Met Office said that this sudden flooding can affect homes, office and buildings are likely to suffer damage.
There is a yellow weather in place for Scotland and Northern Ireland until 11.59 pm on Monday and for all of England and Wales till 11.59 pm Tuesday. Power cuts, train and bus delays and cancellations, besides bad driving conditions for motorists are also likely to happen due to the floods.

Experts say that these rains are not going to help the dry conditions and the drought will persist.
Meanwhile, an amber heat warning was in place on Sunday with temperatures soaring above 30 degree Celsius in some parts of the country. The highest temperature of 34.9 degree Celsius was recorded in Charlwood, Surrey. A drought was recently declared in many places following a nine-day dry spell, the longest since 1976.