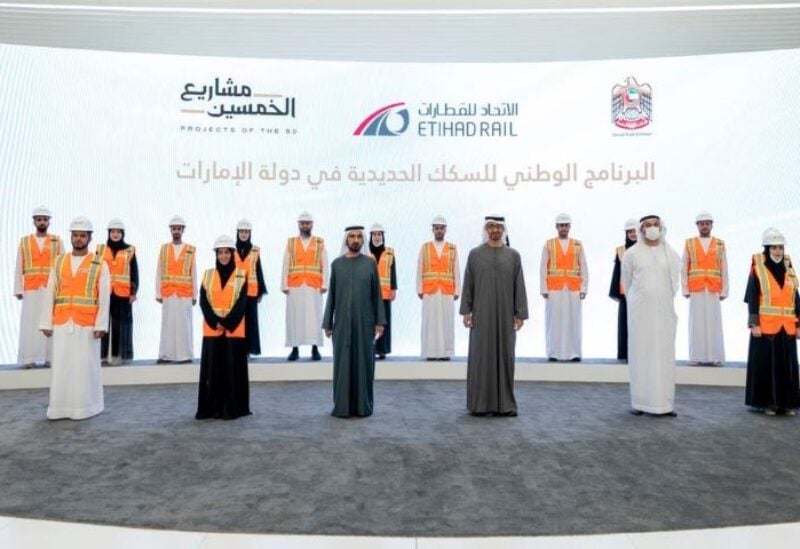 The United Arab Emirates government have announced the launch of the UAE Railways Program, the largest integrated system for transporting goods and passengers across the country.

The government of the United Arab Emirates has announced the commencement of the UAE Railways Program, the country’s biggest integrated system for carrying commodities and passengers.

Etihad Rail will be expanded to incorporate passenger train services, with millions of people projected to travel between the country’s major cities by 2030.

The program, which was unveiled in the presence of Dubai ruler Sheikh Mohammed bin Rashid al-Maktoum and Abu Dhabi Crown Prince Sheikh Mohamed bin Zayed al-Nahyan, is an integrated plan for the UAE’s railway industry over the next few decades, according to state news agency WAM.

The concept involves a countrywide network of railway projects that connect the emirates and the country’s major cities.

The Etihad Rail’s first phase has been completely operating since 2016, with prospects to extend beyond the UAE’s boundaries.

The UAE Railways program is part of the ‘Initiatives of the 50,’ a collection of developmental and economic projects aimed at accelerating the UAE’s growth, transforming it into a complete hub in all industries, and establishing its reputation as an attractive destination for talents and investors.

The UAE Railways Program was inaugurated at Expo 2020 Dubai during a special event honoring the 50 projects.

The ceremony emphasized the program’s aims as well as the phases of the Etihad Rail project, which connects Ghuwaifat on the Saudi border to the port of Fujairah on the Eastern Coast.

“The Etihad Rail is the greatest initiative to solidify the union’s power for the next fifty years,” Sheikh Mohammed stated. It will link 11 significant cities and regions in the UAE.”

“The UAE’s infrastructure is among the greatest in the world, and Etihad Rail will further strengthen the UAE’s logistical excellence.” The project is in accordance with the UAE’s environmental strategy and would cut carbon emissions by 70-80 percent.”

“The National Railways Program symbolizes the true essence of integration into our national economic system, as we witness the broadest collaboration between government bodies at the federal and municipal levels,” Sheikh Mohamed continued. It comes to support a national goal of connecting the country’s important centers of industry and production, opening new trade routes and facilitating people movement, resulting in the region’s most developed work and live environment.”

The UAE Railways Program, according to Sheikh Theyab bin Mohamed bin Zayed al-Nahyan, Chairman of the Abu Dhabi Crown Prince’s Court and Chairman of Etihad Rail, is a significant milestone in the road transport industry.

According to Shadi Malak, Chief Executive Officer of Etihad Rail, the UAE Railways Program would create more than 9,000 employment by 2030.

The UAE Railway Program has an estimated $13.6 billion in investments, 70% of which are aimed at the domestic market.

The initiative contributes to decreasing carbon emissions by 70-80 percent over the next 50 years, which helps the UAE’s efforts to conserve the environment and attain carbon neutrality.

The second project is Rail Passenger Services, which aims to connect 11 locations in the UAE, ranging from Al Sila to Fujairah.

The number of passengers is predicted to exceed 36.5 million per year by 2030.

The third initiative is the Integrated Transportation Service, which will develop an innovation center to ensure the integration of smart transportation solutions. To improve transit inside UAE cities, a light rail network will be linked to the Rail Passenger System.

In addition, smart applications and solutions for trip planning and booking, integrating logistics operations, port and customs services, and delivering integrated logistics solutions will be created.

Despite the hurdles posed by the COVID-19 epidemic, the second building phase began in 2018 and was completed in less than 24 months. Etihad Rail has persisted in completing the project in accordance with its clearly stated goals and thorough work plan.

To date, 180 entities have collaborated, and over 40 thousand formal documents have been issued. Over 3,000 building sites across the country employ 27 thousand workers, resulting in 76 million working hours.