Dutch police break up anti-lockdown protest ahead of election 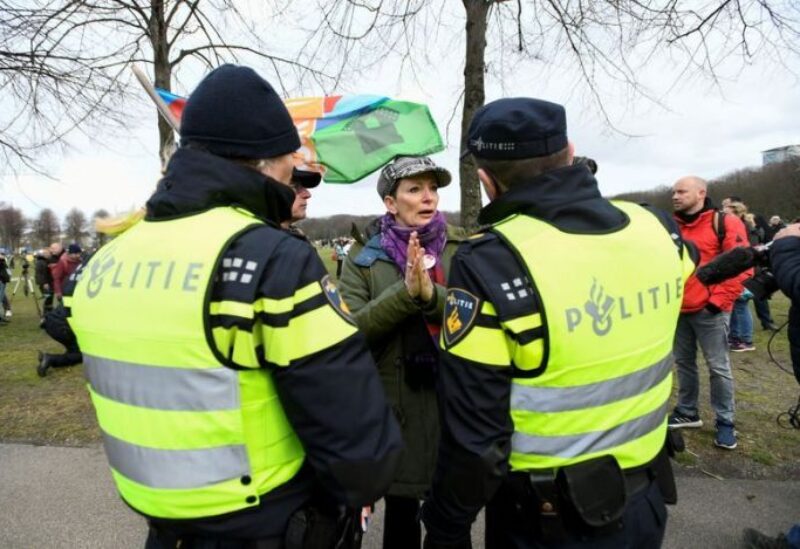 A woman speaks with police officers, as people protest against coronavirus disease (COVID-19) restrictions in The Hague, Netherlands, March 14, 2021.

Dutch riot police used water cannon and batons on Sunday to disperse a crowd of several thousand anti-lockdown demonstrators gathered at a field in the center of The Hague a day before national elections.

The protest was broken up after the demonstrators flouted social distancing rules and ignored police warnings to disperse.

Several arrests were made during the clashes, local media said. There were no immediate reports of casualties.

Dutch authorities had stopped train services to the city, the seat of government, to prevent more protesters arriving. Police initially told people to go home and announced over loudspeakers that the event was over and cautioned that they would break up the demonstration by force if need be.

Many in the crowd, gathered at the central Maliveld field in the city, were holding yellow umbrellas in a show of opposition and chanted “Love, freedom, stop dictatorship.”

The Netherlands has been under a tough lockdown since late January with gatherings of more than 2 people forbidden, restaurants and bars closed and with the first night-time curfew since World War II.

Voting in the election is due to start on Monday, with polls open for 3 days to help to ensure social distancing at polling stations. Prime Minister Mark Rutte’s conservative VVD Party looks set to get a new 4-year mandate after being in power since 2010.

A majority of voters reluctantly support the lockdown, given the Netherlands’ current COVID-19 infection rate which is towards the high end of Europe’s range.

But the curfew, which has been extended until the end of March, prompted several days of rioting across the country when it was first imposed on Jan. 23

“You can do some restrictions of course but you can limit it to the people who are vulnerable and weak in society,” said Hans van der Arend, who traveled from the nearby port city of Rotterdam.

The country of 17 million has registered more than 1.1 million coronavirus cases and at least 16,000 deaths in the global pandemic.