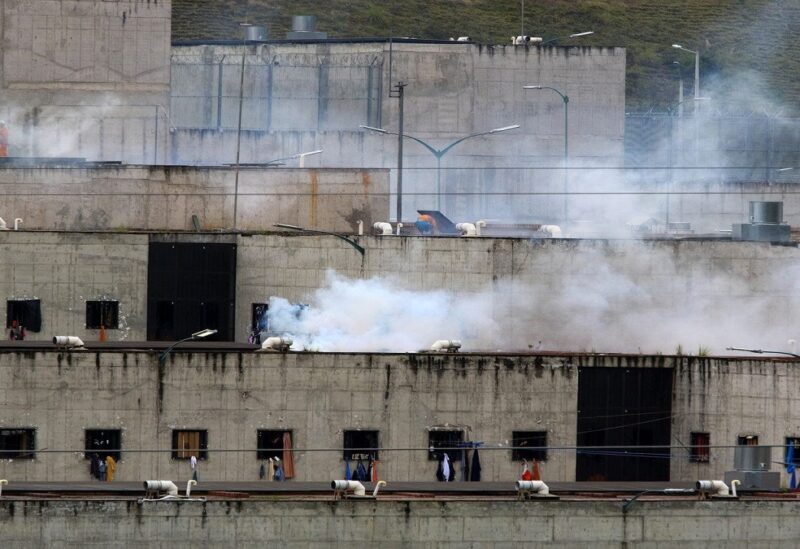 Ecuador on Wednesday raised the death toll from riots in 4 jails to 79, including 18 prisoners who were found dismembered at one site, one of the bloodiest outbreaks of prison violence in the country’s history.

Authorities said they had regained control after the initial riots. However, the head of Ecuador’s national police wrote on Twitter on Wednesday night that a new mutiny in Guayaquil’s prison was under way.

Police and troops were stationed at detention centers in the cities of Cuenca, Guayaquil and Latacunga, where gangs  fought one another on Tuesday with handmade weapons in what authorities said was a coordinated outbreak of violence.

The gangs started a battle for leadership within the jail system in December when a leader of Los Choneros, considered as the system’s most powerful gang, perished in a shopping center several months after being released.

Many of Tuesday’s confrontations occurred in maximum security areas of the Guayaquil and Cuenca prisons.

Prison authority SNAI said all those killed in the rioting were inmates, with first reports citing 50 dead, before jumping to 62 and to 79 as per the latest report. A further dozen prisoners and police were wounded, according to official data.

“Thanks to the actions carried out between this institution and the National Police, the situation … is under control,” authorities added in a statement.

But in the Twitter message Wednesday night noting that a new mutiny in Guayaquil’s prison was under way, the head of Ecuador’s national police said police were bracing to enter again “with necessary rational force.”

SNAI confirmed the new riot on Twitter, saying its agents were coordinating with Ecuador’s national police, but did not elaborate further.

Ecuador’s prosecutor’s office opened an investigation into the riots, noting in a statement it had found 18 dismembered bodies in one of the jails.

Inmates’ relatives remained outside the prisons on Wednesday hoping for information about their loved ones.

President Lenin Moreno acknowledged, in a televised address, that the prison system was overpopulated by nearly 30% and lacked sufficient funding and personnel.

The riots occurred after authorities dismantled cocaine processing laboratories and confiscated 128 tons of drugs in 2020, a record for the Andean country, Moreno said.

“What happened yesterday is not causal, it was organized from outside the jails and internally orchestrated by those who dispute leadership and drug trafficking throughout the national territory,” Moreno said. “What happened yesterday is not a coincidence, it is a consequence,” he noted, saying he would seek international help in the country’s fight against organized crime.

Moreno declared Ecuador’s prison system in a state of emergency in 2019 after a wave of incidents that killed 24.