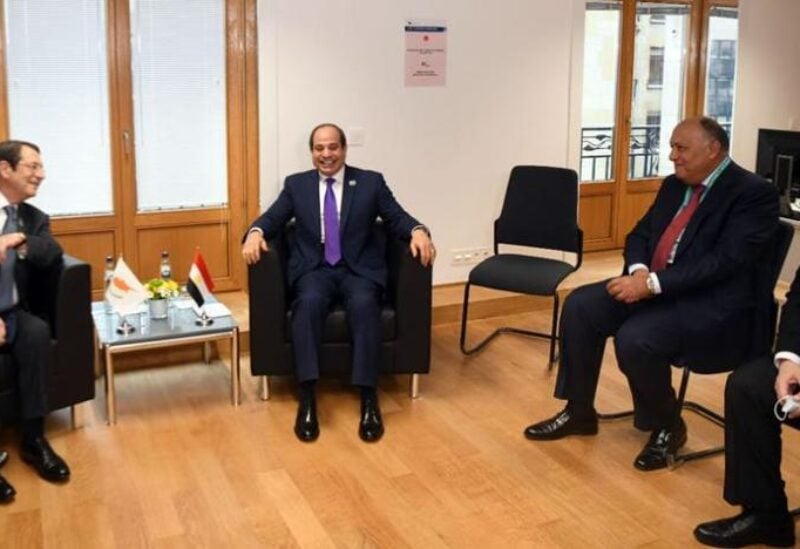 Egypt affirmed its keenness to continue activating cooperation frameworks and intensifying consultation on issues of common interest, whether at the bilateral level or through the tripartite cooperation mechanism that brings together Egypt, Cyprus, and Greece.

Egyptian President Abdel Fattah el-Sisi met his Cypriot counterpart Nicos Anastasiades during his participation in the European-African Summit in Brussels.

The Egyptian presidency issued a statement stressing that the President praised the continuous development in Egyptian-Cypriot relations and the steady progress witnessed at the bilateral level between the two friendly countries.

The Cypriot President expressed his pride in the unique historical ties between Egypt and Cyprus, praising the strength of bilateral relations.

Cyprus aims to take more steps to consolidate further the frameworks of bilateral cooperation and friendship between the two countries, asserted the President.

Anastasiades reiterated that Cyprus would continue to strengthen the tripartite cooperation mechanism with Greece, especially in light of the role Egypt is playing as a pillar of stability in the Middle East and its efforts in the fight against terrorism and illegal immigration.

The two presidents stressed the need to move forward with implementing the joint projects within the framework of the tripartite cooperation mechanism, which contributes to making this mechanism a model for coordination and consultation between the Mediterranean countries, and reflects the specificity of the Egyptian-Cypriot relations.

It is noteworthy that Egypt has close relations with Cyprus and Greece, and the three countries hold regular summits within the framework of their energy cooperation.

The Egyptian President also met the Prime Minister of Bulgaria, Kiril Petkov, during his visit to the Belgian capital.

Also, the Bulgarian Prime Minister affirmed his country’s keenness to develop and boost its relations with Egypt.

The two leaders addressed their relations at the economic level, noting that Egypt is Bulgaria’s largest trading partner in Africa and the Middle East.

The meeting also discussed Egypt’s efforts to improve the business climate, encourage the private sector, and attract foreign direct investment. It addressed the opportunities offered by the major development projects being implemented, especially the Suez Canal Corridor and the New Administrative Capital.