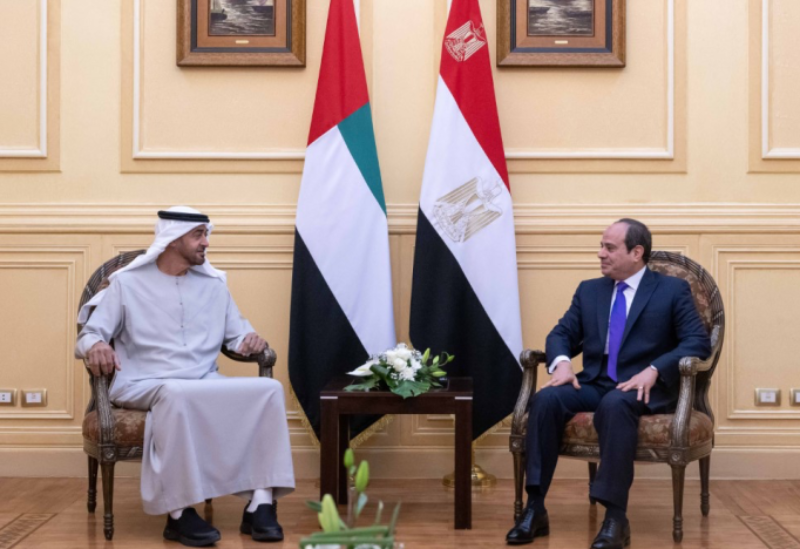 Abu Dhabi Crown Prince Sheikh Mohamed bin Zayed Al Nahyan, Deputy Supreme Commander of the Armed Forces, discussed with Egyptian President Abdel Fattah El-Sisi the prospects of advancing cooperation at all fronts for the benefit of the two countries and their peoples.

Sheikh Mohammed commended the Egyptian-Emirati relations, emphasizing the historic and outstanding ties that bind the two countries’ governments and peoples. He added that his visit also bolsters bonds of bilateral cooperation at all levels.

“Egypt is a cornerstone of Arab security, and its pivotal role and efforts are well appreciated,” WAM quoted Sheikh Mohamed as saying.

Abu Dhabi Crown Prince pointed to the UAE’s keenness to maintain constant cooperation channels between the two nations to promote their common interests and achieve stability, security, and peace in the region.

President Sisi welcomed Sheikh Mohamed’s visit, expressing his pride in the longstanding relations between the UAE and Egypt and the joint action that unites them in facing the challenges besetting regional stability and security.

He also affirmed Egypt’s keenness to strengthen relations with the UAE in various fields and underlined the importance of increasing bilateral meetings to ensure constant coordination over the region’s rapid developments.

At the end of the meeting, they reaffirmed the vision shared by the two countries regarding many files and issues of interest.

The two leaders stressed the need to continue enhancing Emirati-Egyptian cooperation and coordination for consolidating joint Arab action. Sisi highlighted Egypt’s unshakable commitment toward the security of the Gulf and its rejection of any attempts to destabilize it.

The three leaders addressed the necessity of forming a regional coalition to influence the US administration’s policy towards the situation in the Middle East, improve the terms of the nuclear agreement and address the consequences of the war in Ukraine.

A political source told the Hebrew newspaper, Haaretz, that the discussions are part of attempts to form an alliance between countries that were once considered adversaries but now have common interests, including the Gulf states, Israel, Egypt, Jordan, and Turkey.

The countries share the same regional and international concerns and are allies of the US but do not antagonize Russia. They would like to discuss with the US the war in Ukraine and dealing with Iran.

Bennett flew to Sharm el-Sheikh after attending the Ben-Gurion International Airport departure ceremony for the Israeli aid delegation to establish a field hospital in Poland.

A few days earlier, the Israeli PM announced that he plans to visit Egypt and meet President Sisi without specifying an exact date.

The official Kan 11 television channel said that Bennett is meeting with Sisi to discuss bilateral relations and other issues for the second time in six months.

Bennett met Sisi last September in Sharm el-Sheikh, which the Israeli prime minister described as very important. noting that they laid the foundations for “deepening ties and promoting interests.”