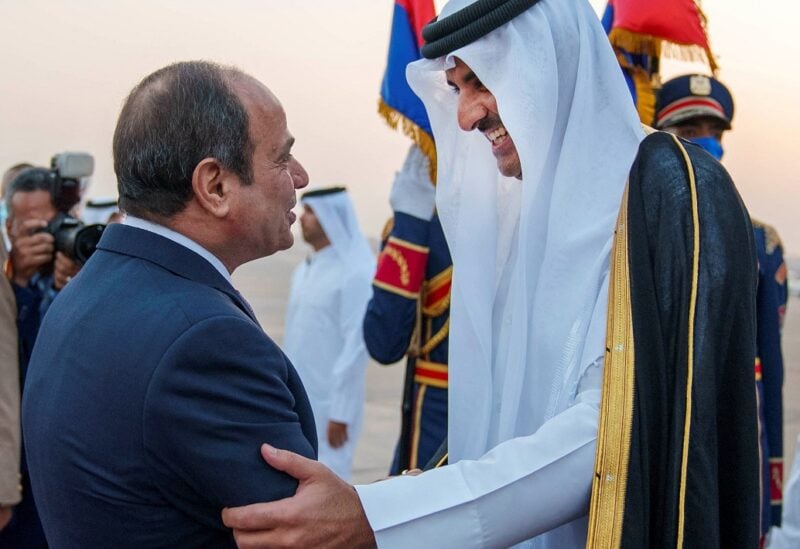 The upcoming Gulf Cooperation Summit that will be hosted by Saudi Arabia and attended by the leaders of Egypt, Jordan, Iraq and the United States, was welcomed by Egyptian President Abdel Fattah al-Sisi and Qatar’s Emir Sheikh Tamim bin Hamad Al Thani. The summit is set for July.

Sisi and Sheikh Tamim held expanded talks in Cairo on Saturday on the second day of the Qatari ruler’s visit.

They stressed the importance of exerting efforts to revive the peace process to reach a fair and comprehensive solution the Palestinian-Israeli conflict and intensifying international counter-terrorism efforts.

Sheikh Tamim was given a formal reception at the presidential palace in Cairo. He held closed-door talks with Sisi and later, expanded talks were held between Egyptian and Qatari officials.

Sisi welcomed Sheikh Tamim as an honored guest, congratulating him on the anniversary of his ascension to the throne.

“This visit embodies the progress achieved in Egyptian-Qatari relations,” he stressed.

He looked forward to the ties being developed further in the future on all levels as part of the reconciliation that was declared at the 2021 AlUla summit.

For his part, Sheikh Tamim underscored Egypt’s “pivotal role in serving Arab causes and its efforts in consolidating Arab solidarity on all levels.”

He praised the “wise policy adopted under Sisi’s leadership in the internal, regional and international arenas.”

He said Qatar was seeking to increase its investments in Egypt and exploit the “broad” investment opportunities that are available.

A joint statement after their talks said Egypt and Qatar were keen on developing their relations, especially in the energy and agriculture fields, and bolstering investments and trade.

They underscored the need to intensify Arab efforts and coordination to tackle various crises in the region.

Qatar hailed Egypt’s role in reconstructing the Palestinian Gaza Strip. Sisi and Sheikh Tamim agreed on the importance of reviving the peace process that secures the legitimate rights of the Palestinian people.

They tackled the negative impact of the Ukrainian crisis on the global economy and explored cooperation in combating terrorism and extremism.