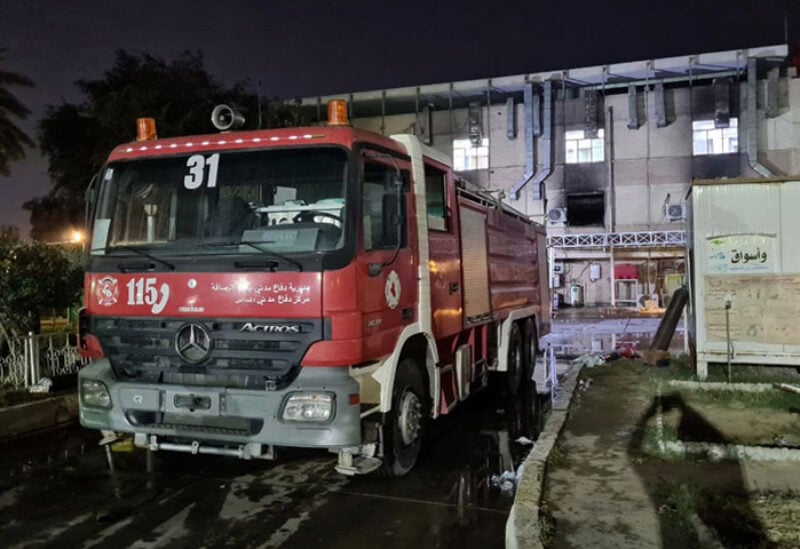 Fire in Hospital in Iraq

Fire extinguishers didn’t work. Outdated medical equipment was being used. The fire alarm system in the hospital was broken.

These are the accusations being levelled by witnesses, medical staff, emergency response teams and those who lost loved ones in a fire at a COVID-19 hospital in Baghdad on Saturday that killed more than 80 people.

Iraq’s latest tragedy, the result of an exploding oxygen tank, is a symptom of the mismanagement that has dogged its healthcare system for years, even at times of relative peace.

It has fueled the anger of Iraqis who say their government and political class’s inability to improve services and root out state-wide corruption ultimately ends in loss of human life.

“Everything in the hospital was old and outdated,” said Mohammed Attar, three of whose relatives perished in the fire, which happened during the Muslim holy month of Ramadan.

“There is nothing good in Iraq’s healthcare system.”

Athar al-Maliki, who lost a family member, lamented what he said was the inability of authorities to respond to an emergency.

“Shouldn’t there be ministerial-level supervision of a COVID-19 hospital in Baghdad? This is total neglect – a hospital burns and there aren’t even firefighting trucks immediately available.”

Iraq’s civil defence first-responder services said they had previously warned authorities of the fire risk at the hospital.

“We officially informed the hospital management and the health directorate that there were safety violations but never got a response,” said Brigadier General Jawdat Abdul Rahman, a spokesman for the civil defence.

“A fire sprinkler system was not available, and there was no working fire detection system,” he said. “Otherwise the fire could have been controlled in a shorter time and there would be fewer casualties.”

Four witnesses to the fire said that fire extinguishers at the hospital were not working when it began to spread.

Iraq’s health ministry, which speaks for the country’s state-run hospitals, has not responded to repeated requests for comment since the incident.

The Iraqi health minister was immediately suspended, a move which many Iraqis believe will make little difference to a healthcare system that has suffered decades of neglect.

Iraq was ravaged by war and U.N. sanctions under dictator Saddam Hussein which led to shortages of medicine and equipment. Sectarian conflict after his fall with the 2003 U.S. invasion of Iraq, and the battle against Islamic State, wreaked more damage.

But even in times of relative stability, Iraq has failed to expand and rebuild its healthcare system.

It has some of the lowest numbers of doctors and nurses per capita in the region, owing partly to an exodus of qualified medics over the years who have at various times been killed, kidnapped or assaulted, including in the coronavirus pandemic.

Government healthcare spending per capita is a fraction of that elsewhere in the region, and lower than the world average.

The fire at the Ibn Khatib hospital in southeastern Baghdad on Saturday brought those realities home.

“This was another blow to what’s left of the limited trust in medical institution,” said Ali Bayati, head of Iraq’s semi-official Human Rights Commission. He said there had been few improvements made to fire response at medical centres in Iraq, despite previous such incidents.

A fire at a Baghdad maternity ward in 2016 killed 13 babies, with emergency response teams slow to end the blaze, he said.

“To have such an incident repeated years later means that still no (sufficient) measures have been taken to prevent them,” he said.

A doctor who worked briefly at Ibn Khatib said he left to go to another hospital because of conditions there, describing it as “chaos”.

“It was hell not only for patients but doctors, too,” the doctor said, speaking on condition of anonymity for fear of being dismissed by the health ministry. “The hospital pharmacy only had paracetamols and simple antibiotic pills.”

Wafa al-Shammari of the Iraqi parliament’s health committee is among those investigating the fire.

“How can a major coronavirus hospital in Baghdad lack safety measures? Why this disregard for human life?” she said.

The government has vowed to hold those responsible to account.

Those who lost loved ones say that is of little comfort.

“He was in the hospital for 25 days. He was meant to be discharged and go home the next day (Sunday),” said 23-year-old Mohammed Ali, whose uncle died in the blaze. “They said, he’s fine now, he’s recovered and can leave.”