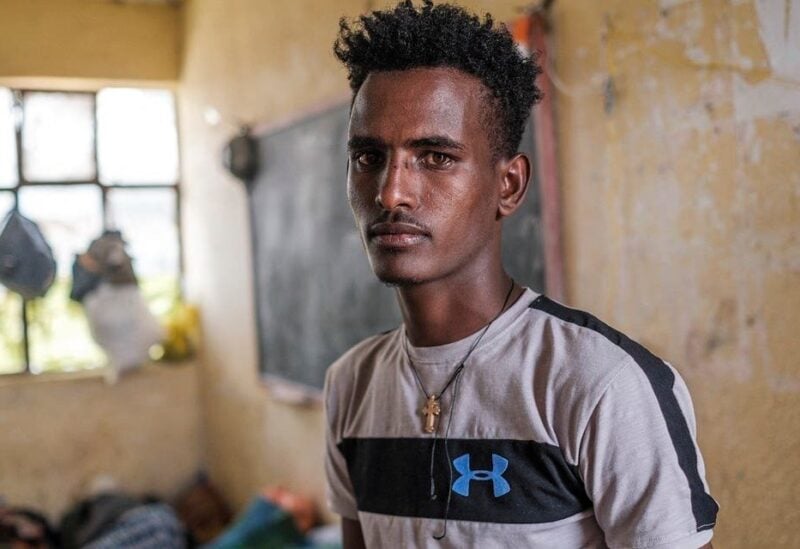 Tilahun Alemu, a youngster displaced by fighting in northern Ethiopia, is portrayed in a classroom at the Addis Fana School where he is temporary sheltered, in the city of Dessie, Ethiopia, on August 23, 2021. (AFP)

Gunmen killed at least 150 people last week in western Ethiopia in an attack by an armed group against local residents, the state-appointed Ethiopian Human Rights Commission said on Thursday.

The commission said residents in Gida Kiremu district in the Oromiya region of Eastern Wollega told investigators the gunmen were from the Oromo Liberation Army (OLA), which splintered from the formerly banned opposition Oromo Liberation Front (OLF).

Ethiopia has been embroiled in a conflict that flared nine months ago in the northern Tigray region and which has spread to other areas. The government has also struggled to contain other outbreaks of ethnic and political violence over land and resources.

The OLA attacked residents on August 18 “based on their ethnic Identity,” the commission said in a statement, saying 150 people were killed in that incident.

The OLA denied it had killed civilians in incidents as described by the commission, saying the incident in Gida Kiremu involved clashes between OLA fighters and Amhara militias.

“When our forces arrived … it was these Amhara fighters that began engaging them in a firefight,” the OLA said in a statement.

The OLA says it is fighting for the rights of the Oromo people, the Horn of Africa country’s largest ethnic group. There have frequently been deadly clashes this year between the Oromo and the Amhara, another major ethnic group.

An Amhara resident told Reuters that Amhara people had tried to fight off the OLA attackers. “As soon as they came they opened fire. We tried to defend ourselves and fire back,” the resident said.

The commission said there were several attacks in the days after the August 18 incident, killing 60 people.

“We are still trying to assess the number of people who died, those who committed the attack and what exactly happened,” Zelalem Sori, the Eastern Wollega government spokesperson, told Reuters.

Forces from Ethiopia’s rebellious Tigray region said in August they were in talks to forge a military alliance with the OLA, piling pressure on the Ethiopian government.

The US government said on Wednesday the war and humanitarian crisis in Ethiopia’s north could affect trade benefits under the US African Growth and Opportunity Act (AGOA).

AGOA gives sub-Saharan African nations duty-free access to the United States provided they meet conditions such as eliminating barriers to US trade and investment and moving towards political pluralism. Ethiopia exported goods worth almost $250 million to the United States under AGOA in 2019, US data shows.

All sides in the Ethiopian conflict have been accused of abuses.