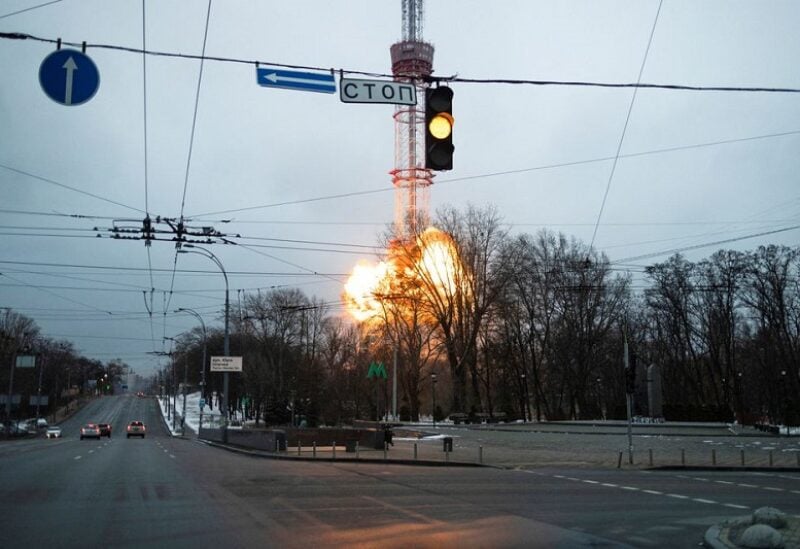 A blast is seen in the TV tower, amid Russia's invasion of Ukraine, in Kiev, Ukraine March 1, 2022. REUTERS/Carlos Barria

On Monday, the European Commission denounced Russian missile assaults on Kyiv and other Ukrainian cities as “barbaric,” and warned Belarus against assisting its partner in killing people.

EU foreign policy head Josep Borrell said Russia’s actions had “no place in the twenty-first century,” adding in a tweet that the EU will provide military assistance to Ukraine.

Russia hammered cities throughout Ukraine at rush hour in apparent retaliation for President Vladimir Putin’s declaration of a terrorist attack on Russia’s bridge to Crimea.

“They are barbaric and cowardly attacks… targeting innocent civilians on their way to work and school in the morning traffic,” Peter Stano, a spokesperson for the European Union’s executive arm told the Commission’s daily news briefing.

He described the strikes as a contravention of international humanitarian law and said Russia’s political and military leadership would be held accountable for these and other war crimes.

The Commission urged Belarus to refrain from any involvement in Russia’s “brutal illegitimate undertaking” that violated the United Nations Charter and international law.

Specifically, it told Minsk immediately to stop allowing the territory of Belarus to serve as a launch pad for very recent missile strikes and drone attacks against Ukrainian civilians.

“Any further actions and in particular the Belarusian military’s direct involvement into this war, against the will of the vast majority of the Belarusian people, will be met by new and strong restrictive measures,” Stano said.

Belarusian President Alexander Lukashenko said on Monday he had ordered troops to deploy with Russian forces near Ukraine in response to what he said was a clear threat to Belarus from Kyiv and its backers in the West.