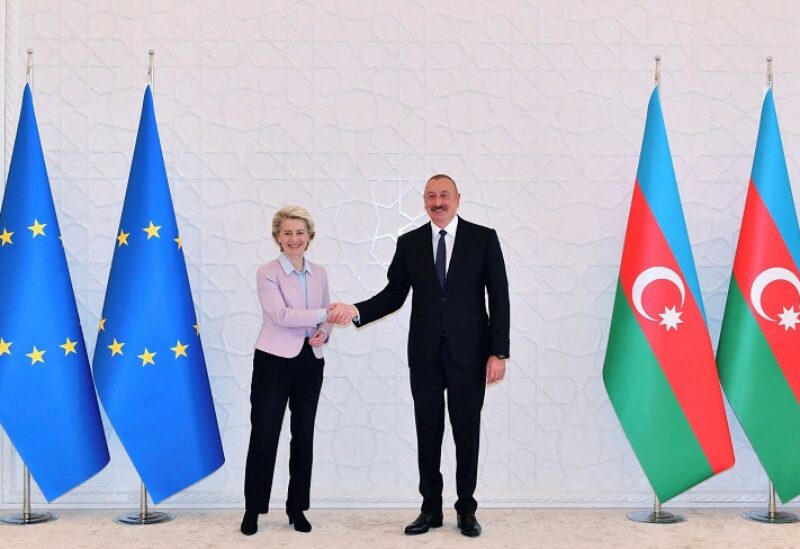 Azerbaijani President Ilham Aliyev shakes hands with European Commission President Ursula von der Leyen during a meeting in Baku, Azerbaijan, July 18, 2022. Official web-site of the President of the Republic of Azerbaijan/Handout via REUTERS ATTENTION EDITORS - THIS IMAGE HAS BEEN SUPPLIED BY A THIRD PARTY. NO RESALES. NO ARCHIVES. MANDATORY CREDIT.

With rising fears of Russia cutting down on the gas supplies, the EU has now found a new source. On Monday, they signed a new gas deal with Azerbaijan who have committed to deliver 20 billion cubic meters by the year 2027, according to the statement released by the two parties.
Azerbaijan is slowly becoming a major supplier of gas in the region since they started exporting to Europe in 2020. They had prior agreements with Bulgaria, Italy and Greece.

With the new agreement with EU, they are expected to increase their supply from 8.1 billion cubic meters in 2021 to 12 billion cubic meters in 2022.
The deal was finalised in the presence of Europe’s energy chief, Kadri Simson, and European Commission President Ursula von der Leyen who travelled to Azerbaijan for the official signing.
“Amid Russia’s continued weaponization of its energy supplies, diversification of our energy imports is a top priority for the EU,” the European Commission said in a statement earlier on Friday.

Although there were some doubts regarding Russia’s use of gas supplies as a threat, a letter from Russian energy company Gazprom said that they were unable to “fulfil their commitments” due to “extraordinary” circumstances., Reuters reported.