EU vows to support Ukraine for ‘as long as it takes’ 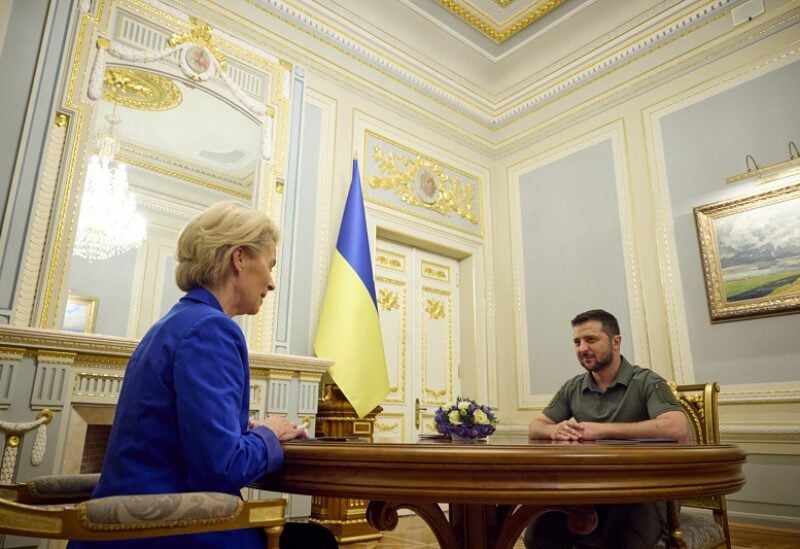 “We will never be able to match the sacrifice that the Ukrainians are making… but what we can tell you is that you’ll have your European friends by your side as long as it takes,” said President of the European Commission Ursula von der Leyen, during a joint press conference with Ukrainian President Volodymyr Zelenskyy on Thursday in Kyiv.

Von der Leyen also said that Ukraine’s accession process to join the European Union “is well on track” and congratulated Ukraine on its recent military accomplishments in the war with Russia.

For his part, Zelenskyy said that his country wants to join the European single market ahead of a decision on whether to grant Kyiv full EU membership.

Von der Leyen had announced her visit on Wednesday during her State of the European Union address to the European Parliament in Strasbourg, for which Olena Zelenska, wife of Ukrainian President Volodymyr Zelenskyy, was present.

“So much has changed. Ukraine is now a European Union candidate,” von der Leyen wrote on Twitter.

Ukraine applied for membership of the EU while under Russian bombardment and was granted candidate status in less than four months.
International Atomic Energy Agency’s 35-nation Board of Governors passed a resolution demanding that Russia end its occupation of the Zaporizhzhia nuclear power plant in Ukraine.

The Russian military and the Russian state nuclear corporation Rosatom should suspend all activities at the nuclear plant and hand control back to Ukrainian authorities, the IAEA’s decision-making body in Vienna demanded.

The text was passed with 26 votes in favour, two against and seven abstentions, diplomats said, adding that Russia and China were the countries that voted against.

The Zaporizhzhia nuclear power plant, the largest in Europe, has come under repeated fire in recent weeks. Moscow and Kyiv blame each other for the attacks.

“We have decided to deliver two more MARS II multiple rocket launchers including 200 rockets to Ukraine,” she told a Bundeswehr conference, adding the training of the Ukrainian operators was expected to start in September.

In addition, 50 Dingo armored vehicles would be delivered to Ukraine, Lambrecht said. the Dingo is an armored vehicle that the German military extensively used during NATO’s military operation in Afghanistan.

She also said a deal on a circle swap of infantry fighting vehicles with Greece and Ukraine was almost completed. According to Lambrecht, Germany would soon hand over 40 Marder IFVs to Greece while Greece, in turn, would pass on 40 of its Soviet-built BMP-1 Infantry Fighting Vehicles to Ukraine.

The €500 million will be used to support Kyiv covering short-term financing needs as well as funding urgent repair work on Ukrainian logistics impacted by the war.

European Commission Executive Vice-President Valdis Dombrovski said this payment will “have a real impact on the ground in Ukraine.”

This is the second emergency support package from Europe to Ukraine, with €668 million disbursed shortly after Russia first invaded.

In an interview with the daily Frankfurter Allgemeine Zeitung published on Thursday, Baerbock said the decision must be a joint one by the three-party coalition of her Green Party, Chancellor Olaf Scholz’s Social Democrats (SPD) and the business-friendly Free Democrats (FDP), along with international partners.

“But in the decisive phase that Ukraine currently finds itself, I also don’t believe that it’s a decision which can be delayed for long,” she was quoted as saying.

Germany has so far shown reluctance to supply its Leopard-2 battle tanks to Ukraine, despite Kyiv’s request that it do so, in a policy that is in line with its Western partners, who fear that the delivery of such weapons could be seen by Moscow as tantamount to their active involvement in the conflict.

Germany has, however, delivered other heavy weaponry such as howitzers and self-propelled anti-aircraft weapons.