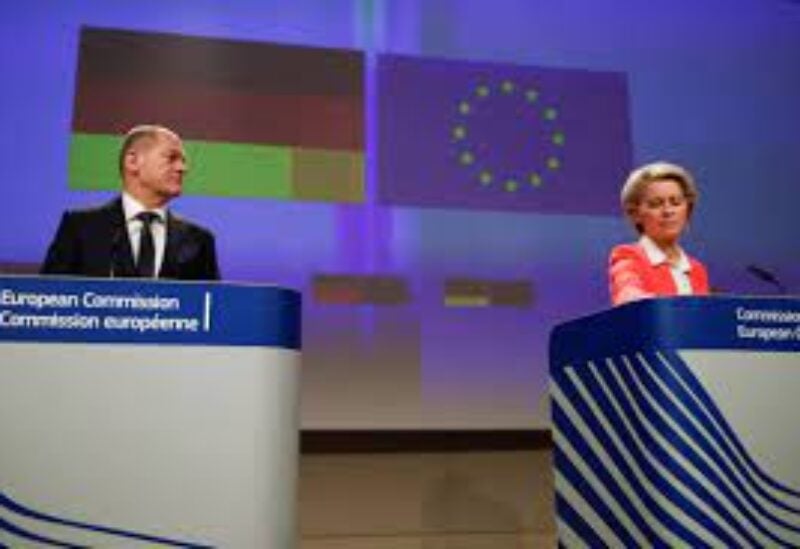 The European Union warned Russia on Friday that it would suffer repercussions if it invaded Ukraine, as Germany’s new chancellor urged for talks to de-escalate tensions as Moscow gathered soldiers on its southern border.

“Aggression must have a cost, which is why we will express these points to Russia ahead of time,” European Commission President Ursula von der Leyen said at a joint news conference with Olaf Scholz.

Ukraine accuses Russia of planning a large-scale military attack. The Kremlin has denied any plans for a strike.

Asked sanctions on Moscow could include shutting the Nord Stream 2 pipeline that will carry gas to Europe, von der Leyen said that, in general, energy should never be used to exert pressure and the energy security of Europe and its neighbors should be secured.

Scholz declined to answer the question on the Russian-German pipeline, saying that while it was clear that the EU and others would react if there was an invasion of Ukraine, talks to prevent such an outcome were also important.

Earlier in the day during a visit to France, Scholz called for a revival of the “Normandy format” talks between Germany, France, Russia and Ukraine to resolve the crisis.

French President Emmanuel Macron warned during his meeting with Scholz’s about the risk of self-fulfilling prophecies following a U.S. intelligence assessment that a multi-front offensive on Ukraine by Russia could happen as early as next year.

Von der Leyen said the 27-nation EU was ready to step up economic and financial sanctions against Russia, along with partner countries, should it invade Ukraine.

“We want a good relationship with Russia, but it depends first and foremost on the way in which Russia behaves. Russia is taking a threatening stance towards its neighbours and that undermines Europe’s security,” she said.