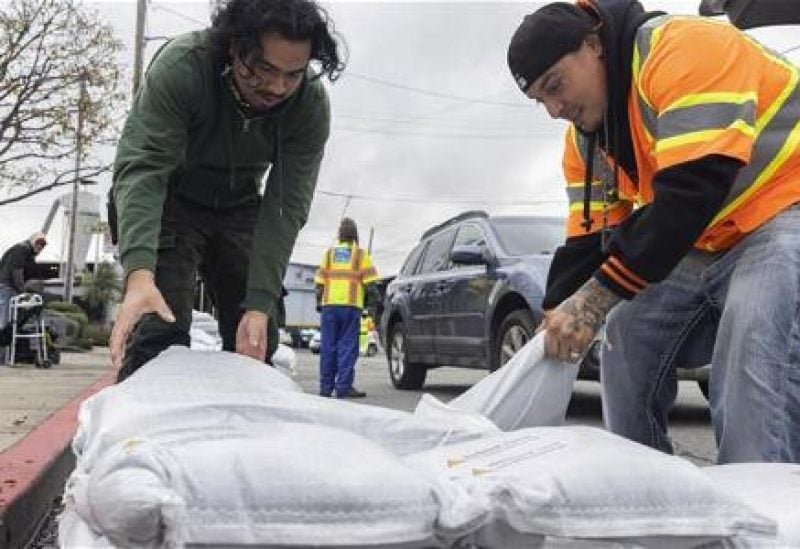 Officials in California ordered evacuations in a high-risk coastal area where mudslides killed 23 people in 2018 as a huge storm barreled into the state Wednesday, bringing high winds and rain that threatened widespread flooding and knocked out power to more than 100,000 people.

The storm was expected to dump up to 6 inches (152.4 millimeters) of rain in parts of the San Francisco Bay Area where most of the region would remain under flood warnings into late Thursday night. In Southern California, the storm was expected to peak in intensity overnight into early Thursday morning with Santa Barbara and Ventura counties likely to see the most rain, forecasters said.

“We anticipate that this may be one of the most challenging and impactful series of storms to touch down in California in the last five years,” said Nancy Ward, the new director of the California Governor’s Office of Emergency Services.

San Francisco Mayor London Breed said at a news conference that the city was “preparing for a war.” Crews cleared clogged storm drains, tried to move homeless people into shelters and passed out emergency supplies and ponchos to those who refused to go.

The city distributed so many sandbags to residents that supplies temporarily ran out.

Powerful winds gusting to 85 mph (136 kmh) or more forced the cancellation of more than 70 flights at San Francisco International Airport and downed trees and power lines. Firefighters rescued a family after a tree fell onto their car. The fire department reported “large pieces of glass” fell off the Fox Plaza tower near the Civic Center, although no injuries were reported. It was “highly possible” the damage to the skyscraper was wind-related, the department tweeted.

The new storm left more than 100,000 customers in the San Francisco Bay Area and the Central Coast without power.

The storm is one of three so-called atmospheric river storms in the last week to reach the drought-stricken state. California Gov. Gavin Newsom declared a state of emergency to allow for a quick response and to aid in cleanup from another powerful storm that hit just days earlier.

In Southern California, evacuations were ordered for those living in areas burned by three recent wildfires in Santa Barbara County, where heavy rain forecast for overnight could cause widespread flooding and unleash debris flows.

County officials did not have a firm number for how many people were under evacuation orders, but Susan Klein-Rothschild, a spokesperson in the county’s emergency operations center, said sheriff’s deputies went door-to-door and contacted at least 480 people.

Among the towns ordered to evacuate was Montecito, where five years ago huge boulders, mud and debris swept down mountains through the town to the shoreline, killing 23 people and destroying more than 100 homes. The town is home to many celebrities, including Oprah Winfrey and Prince Harry and his wife, Meghan.

“What we’re talking about here is a lot of water coming off the top of the hills, coming down into the creeks and streams and as it comes down, it gains momentum and that’s what the initial danger is,” Montecito Fire Department Chief Kevin Taylor said.

Drivers were urged to stay off the roads unless absolutely necessary, especially with heavy snow expected in the mountains.

The storm came days after a New Year’s Eve downpour led to the evacuations of people in rural Northern California communities and the rescue of several motorists from flooded roads. A few levees south of Sacramento were damaged.

On Wednesday, authorities in south Sacramento County found a body in a submerged car – one of at least four victims of flooding from that storm.

Evacuation orders were in place in Santa Cruz County’s Paradise Park along the swiftly moving San Lorenzo River, as well as in areas along the Pajaro River. Residents who fled wildfires in the Santa Cruz Mountains in 2020 were packing their bags as the towns of Boulder Creek, Ben Lomond and Felton were all warned they should be prepared to evacuate.

Sonoma County authorities issued an evacuation warning for a string of towns along the Russian River, which was expected to reach flood stage on Thursday.

The storms won’t be enough to officially end the state’s ongoing drought, now entering its fourth year. The U.S. Drought Monitor showed that most of California is in severe to extreme drought. Since the state’s major reservoirs are low, they have plenty of room to fill with more water from the storm, officials said.

Trees already stressed from years of limited rain are more likely to fall now that the ground is suddenly saturated and winds are heavy. That could cause widespread power outages or create flood hazards, said Karla Nemeth, director of the state’s Department of Water Resources.

Storms also took a toll elsewhere in the U.S. In the Midwest, ice and heavy snow this week closed schools in Minnesota and western Wisconsin and caused a jet to go off an icy taxiway after landing in a snowstorm in Minneapolis. No passengers were injured, Delta airlines said.

In the South, a possible tornado damaged homes, downed trees and flipped a vehicle on its side in Montgomery, Alabama, early Wednesday.

In Illinois, staff from the National Weather Service’s Chicago office planned to survey storm damage on Wednesday following at least six tornadoes, the largest number of rare January tornadoes recorded in the state since 1989.