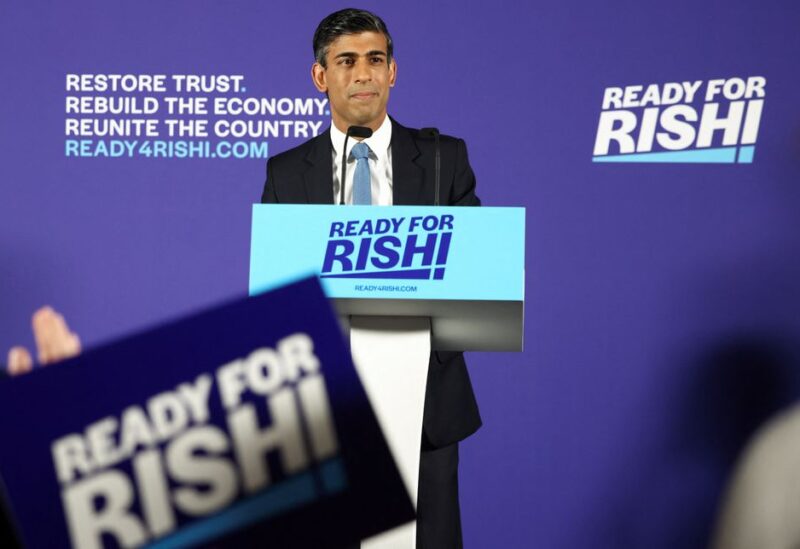 Former Chancellor of the Exchequer Rishi Sunak speaks to the media at an event to launch his campaign to be the next Conservative leader and Prime Minister, in London, Britain, July 12, 2022. REUTERS/Henry Nicholls

Rishi Sunak, the former finance minister and front-runner to succeed Boris Johnson as prime minister of the United Kingdom, launched his campaign on Tuesday, vowing to be “honest.”

After Johnson was forced to announce his resignation after losing support due to a slew of scandals, 11 contenders first put their names forward to lead the ruling Conservative Party and become the next prime minister of Britain.

Only those who get nominations from 20 of their 358 Conservative colleagues in parliament on Tuesday will go forward to the first vote on Wednesday. The field will be then be quickly whittled down a final two, with Conservative Party members making the final decision.

Transport minister Grant Shapps became the first to end his bid, throwing his support behind Sunak, whose resignation helped provoke the revolt by ministers and Conservative lawmakers that forced Johnson to say he would resign last week.

Britain’s economy is facing rocketing inflation, high debt, and low growth, with people coping with the tightest squeeze on their finances in decades, all set against a backdrop of an energy crunch exacerbated by the war in Ukraine which has sent fuel prices soaring.

As the contest heated up, rival campaigns stepped up private criticism of each other and pointed to either financial or other questions hanging over their opponents.

With most candidates saying they would cut taxes if they win, Sunak, the current bookmakers’ favourite, has sought to portray himself as the serious candidate, promising “grown up” honesty “not fairy tales”.

“It is not credible to promise lots more spending and lower taxes,” said Sunak,

As finance minister, Sunak set Britain on course to have its biggest tax burden since the 1950s, and the other prime ministerial hopefuls have turned their fire on him on tax, with most saying they would oversee cuts immediately.

Sunak said he did not want to distance himself from the fiscal decisions he made during the COVID-19 pandemic.

“Whilst that may be politically inconvenient for me, it is also the truth. As is the fact that once we’ve gripped inflation, I will get the tax burden down,” he said. “It is a question of when, not if.”

The former finance minister has the widest support among colleagues who have publicly expressed their view, including the backing of Deputy Prime Minister Dominic Raab.

“I know that Rishi has got what it takes,” Raab said, introducing Sunak at his campaign launch event.

Penny Mordaunt, a junior trade minister who is also heavily tipped, topped a poll of Conservative members on Monday and she too has tried to strike a more measured tone on tax, saying that while she would cut taxes: “I will pioneer sound money.”

“I am a small state, low tax conservative, but I also believe we need to use the levers of government to support jobs and livelihoods through difficult economic situations,” she wrote in the Daily Telegraph newspaper.

Among the others to launch their campaigns on Tuesday were Tom Tugendhat, the chair of the foreign affairs committee, and Kemi Badenoch, a former junior minister who is scooping up some support on the right wing of the party.

Foreign Secretary Liz Truss was also hoping to challenge those at the top of the leader board and received the backing on Tuesday of two ministers closest to Johnson – Nadine Dorries and Jacob Rees-Mogg – who have both been critical of Sunak.

On Monday, the 1922 Committee of Conservative members of parliament agreed the rules for the contest, saying the field will soon be whittled down with repeated votes in the next few weeks and the final two being presented to the party by July 21.

It said the winner, and Britain’s new prime minister, would be announced on Sept. 5.

The main opposition Labour Party will put forward a motion of no confidence in the government on Tuesday to try to force Johnson out of office straightaway. The vote will be held on Wednesday and although some Conservatives have voiced concern at Johnson remaining as prime minister, they are very unlikely to support it.

The new leader will have to reverse evaporating support. A survey by Savanta ComRes on Monday put Labour at 43% compared with 28% for the Conservatives, its biggest poll lead since 2013.