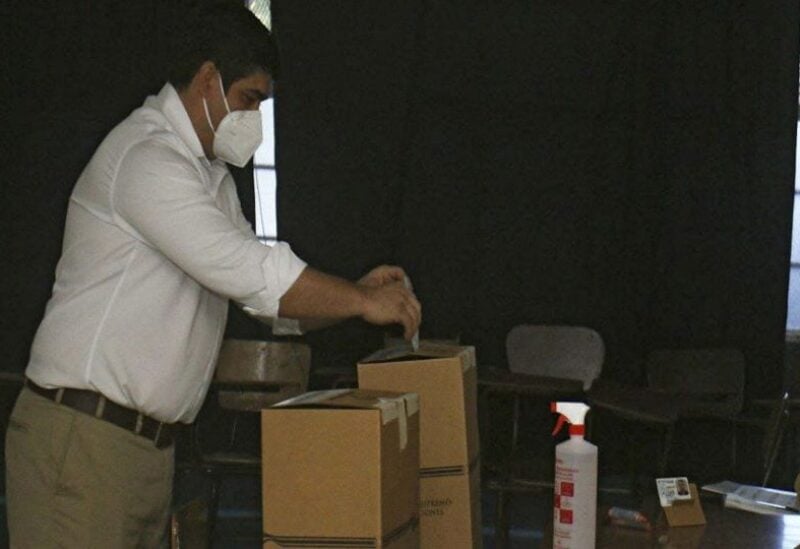 Carlos Alvarado Quesada, President of Costa Rica, casts his ballot during the first round of Costa Rica's presidential election

Based on results from roughly half of the polling stations, Figueres was projected to receive 28 percent of the vote, with Chaves edging out evangelical Christian Fabricio Alvarado for second place.

Chaves, an economist and former World Bank official who managed Costa Rica’s finance ministry for many months under departing President Carlos Alvarado, received around 16.6 percent of the vote.

Fabricio Alvarado of the neo-Pentecostal New Republic Party, who finished second in the Central American country’s 2018 election, received about 16 percent of the vote.

A contender must receive more than 40% of the vote to win the first round outright. Otherwise, the two leading candidates will face off in a run-off election on April 3.

According to surveys, Figueres, who led the moderate National Liberation Party from 1994 to 1998, was a small favorite coming into the first round.

The unicameral parliamentary assembly’s 57 seats are also up for grabs.

Costa Ricans have stated that they want their next president to address corruption and high unemployment rates during his or her four-year term.

According to the electoral tribunal, voting went off without a hitch across the country, with a preliminary turnout of around 59 percent.

Enrique Romero, a 52-year-old construction worker in San Jose, said he would vote for Figueres.

“I want things to become better, so the government can work better,” Romero stated. “The situation is dire. It is not about going back in time, but about moving forward and learning from one’s mistakes.”

President Carlos Alvarado, a center-left politician, is barred from running for a second straight term.

According to surveys, almost one-third of voters in the Central American country of about 5 million people had not decided who to support ahead of the election.

Victor Morales, a 56-year-old flag seller, was among the uncertain.

“My business has suffered as a result of the awful regimes we’ve had,” Morales explained. “Previously, people would gather to support political parties.”

In the Center for Research and Political Studies survey, the ruling center-left Citizen Action (PAC) party, which has been in office for two terms, earned less than 1% of the vote.

Among other things, the national legislature is expected to secure significant financial assistance from the International Monetary Fund (IMF).