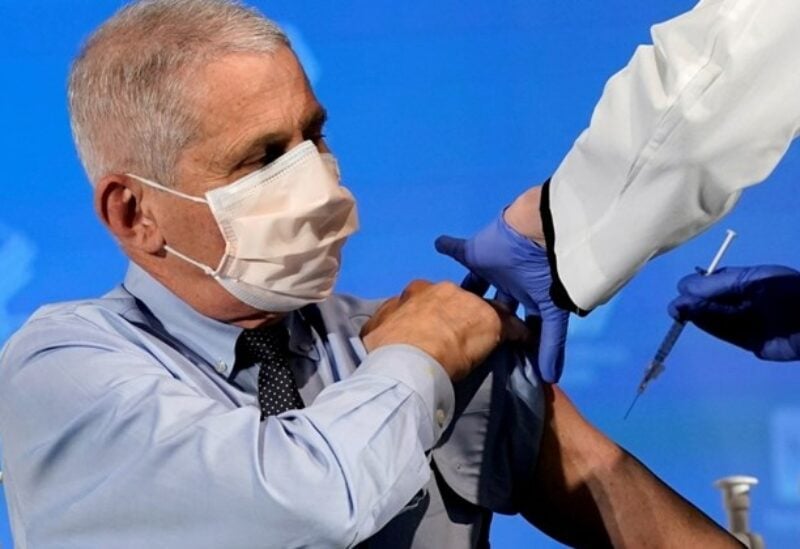 WASHINGTON: Dr. Anthony Fauci, the top U.S. infectious disease official, said on Sunday he would take the newly approved Johnson & Johnson COVID-19 vaccine, as he encouraged Americans to accept any of the three approved shots.

“All three of them are really quite good, and people should take the one that’s most available to them. If you go to a place and you have J&J, and that’s the one that’s available now, I would take it,” Fauci said on NBC’s “Meet the Press.”

The U.S. government authorized Johnson & Johnson’s single-dose COVID-19 vaccine on Saturday, making it the third to be available in the country following ones from Pfizer/BioNTech and Moderna. Both of those vaccines require two doses and need to be shipped frozen. The J&J vaccine can be shipped and stored at normal refrigerator temperatures.

The J&J vaccine is expected to get final approval for widespread use on Sunday, and shipments are expected to begin Sunday or Monday.

Both the Pfizer and Moderna vaccines showed higher efficacy rates in trials that used two doses versus J&J’s single-shot vaccine. However, Fauci and other experts say direct comparison is difficult because the trials had different goals and J&J’s was conducted while more contagious new variants of the virus were circulating.

Fauci said studies are now underway to determine their effectiveness and safety for children under 18, who are less likely to get sick from the virus.

The new vaccine gives the U.S. government another option as it tries to immunize as many Americans as quickly as possible. About 14% of Americans have received at least one dose so far, according to government data.

President Joe Biden has said there should be enough supply to vaccinate all Americans by the end of July.

COVID-19 has claimed more than half a million lives in the United States, and states are clamoring for more doses to stem cases, hospitalizations and deaths. (Graphic: https://tmsnrt.rs/34pvUyi)

Daily infections have declined dramatically since their January peak, and some states have begun to loosen restrictions on public gatherings. However, Fauci warned that caseloads could rise again if officials move too quickly.

“It’s really too premature right now to be pulling back too much,” he said.