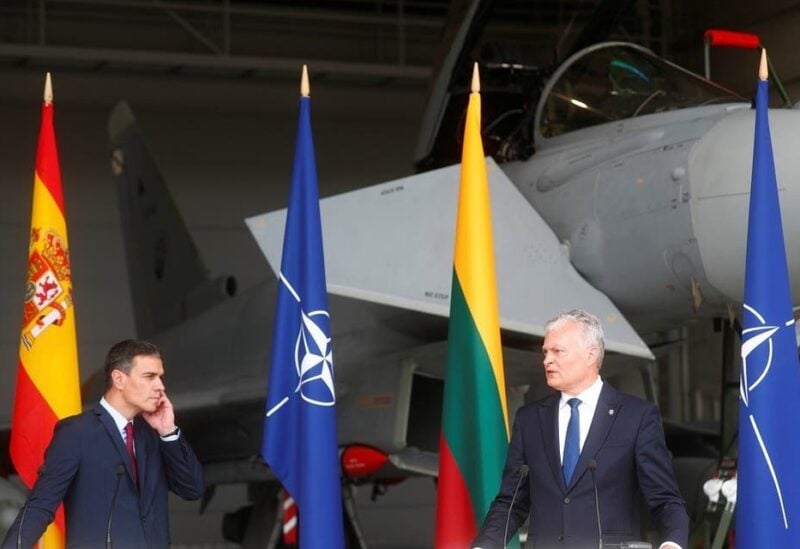 A news conference at a NATO air base in Lithuania featuring Lithuania’s president and Spain’s prime minister got abruptly cut off Thursday when the pair of Spanish fighter jets serving as the leaders’ backdrop were scrambled to monitor a situation in the Baltic skies.

Nauseda and Sánchez were speaking with two Eurofighter Typhoons behind them at the base in the town of Siauliai when security officials suddenly interrupted the leaders as crews scrambled to get on the fighter jets, live footage from the press conference showed.

“Our press conference was interrupted by a real call….You see, everything works great. I can confirm that the fighter jets took off in less than 15 minutes” of receiving the alarm, Lithuanian public broadcaster LRT quoted Nauseda as saying after the incident. “Thanks to Pedro (Sánchez), we have really seen how our air policing mission works.”

Sánchez told reporters when the news conference resumed: “We have seen a real case of what usually happens that precisely justifies the presence of Spanish troops with the seven Eurofighters in Lithuania.”

The three Baltic nations — Estonia, Latvia and Lithuania — joined NATO in 2004 and have no fighter jets of their own. NATO has the responsibility of policing their airspace on a rotational four-month basis from the base in Siualiai and in Amari, Estonia.

Lithuanian Defense Minister Arvydas Anusauskas confirmed that an alarm signal was triggered at the base in his country and posted a video on Facebook of one of the departing Spanish fighters.

Sánchez is on the final day of a three-day trip to the Baltic region and earlier met with officials in Estonia and Latvia.