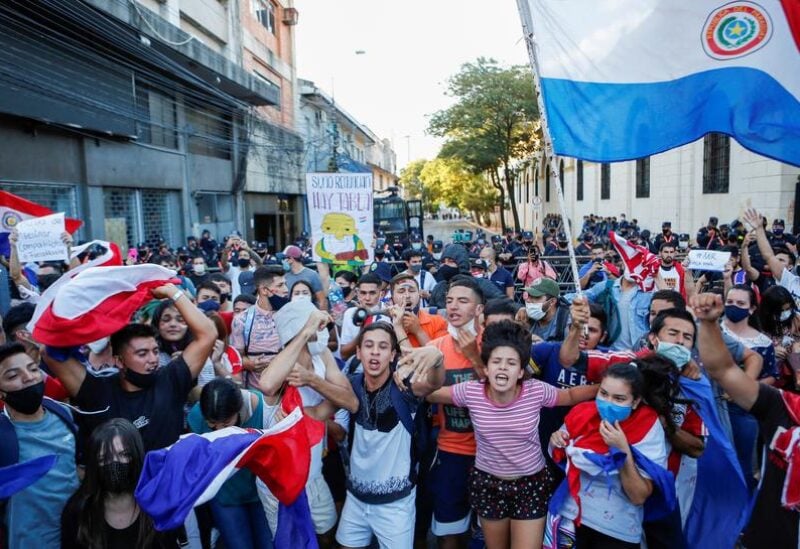 Protesters take to the streets in Paraguay

Demonstrators clashed with police in Paraguay´s capital, Asuncion, late on Friday as outrage over the government´s handling of the COVID-19 crisis boiled onto the streets and forced the resignation of the country´s top health official.

Security forces fired rubber bullets and tear gas on hundreds of rioters who gathered around the Congress building in downtown Asuncion, while protesters broke down security barriers, burned road barricades and threw stones at police officers.

The riots, which turned the capital’s historic center into a make-shift battlefield of fire, smoke and gunshots, erupted amid growing anger as coronavirus cases hit record levels and hospitals verged on collapse throughout the South American nation.

“It is a pity that young people have taken this too far. They are people who seek only to destroy,” Interior Minister Arnaldo Giuzzio told the Telefuturo television channel. “This violence does not make sense.”

Health minister Julio Mazzoleni resigned, earlier on Friday, a day after lawmakers called on him to step down.

Mazzoleni is the latest of several top health officials across Latin America forced from their jobs in recent weeks amid increasing anger over the handling of the pandemic and slow rollout of vaccinations.

Paraguay is posting record numbers of cases daily, according to a Reuters tally, with 115 infections per 100,000 people reported in the last 7 days.

The country has vaccinated less than 0.1% of its population, the data shows.