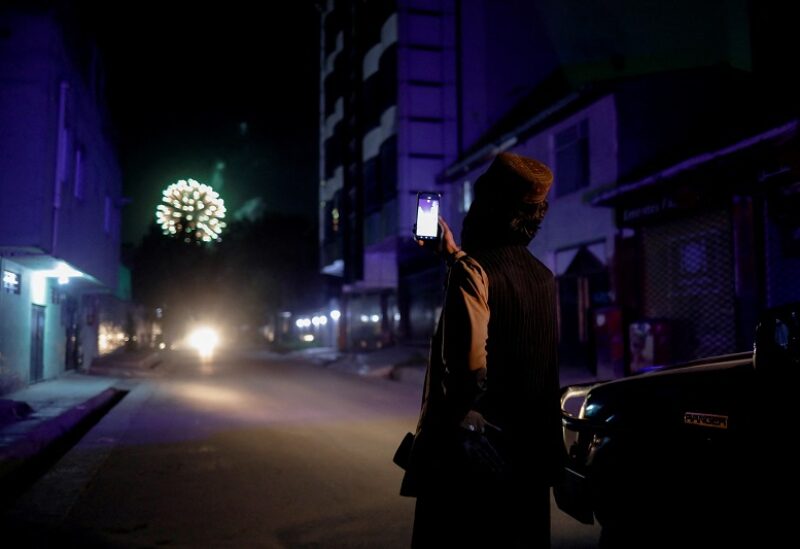 A Taliban fighter takes pictures on his mobile phone on the first anniversary of the departure of U.S. forces from Afghanistan, on a street in Kabul, Afghanistan, August 30, 2022. REUTERS/Ali Khara

Fireworks lit up Kabul sky, Tuesday night, the first anniversary of the American pullout from Afghanistan, which the Taliban are observing as “Freedom Day.”
The Taliban, who had conducted a 20-year insurgency against American-led forces that invaded Afghanistan in October 2001 in response to the September 11 attacks in New York, took control of the war-torn nation as the departure was completed a minute past midnight local time on August 30.

Taliban spokesman Zabihullah Mujahid had earlier on Tuesday stated that “fireworks with various and beautiful colours are going to be held to mark Freedom Day.”

In many parts of Kabul, there was ferocious aerial shooting in celebration in addition to the fireworks.
According to the labour ministry, the de facto Taliban government also designated Wednesday a public holiday to honour the occasion.

Back then, the commander of US Central Command had acknowledged that the withdrawal had caused “a lot of sadness.” Washington and its NATO allies were obliged to leave soon because they had no idea the Taliban would win so rapidly.

After a massive but chaotic airlift that resulted in the deaths of 13 American service personnel and left behind thousands of Afghans and hundreds of Americans still looking for freedom from Taliban rule, the United States finished its military departure from Afghanistan.

Many more are still in Afghanistan, where the Taliban are attempting to set up a fully operational government that is accepted by the international community, though some have since been permitted to depart.

The Taliban are currently contending with their own insurgency, which is being led by the militant organization’s Afghanistan branch.