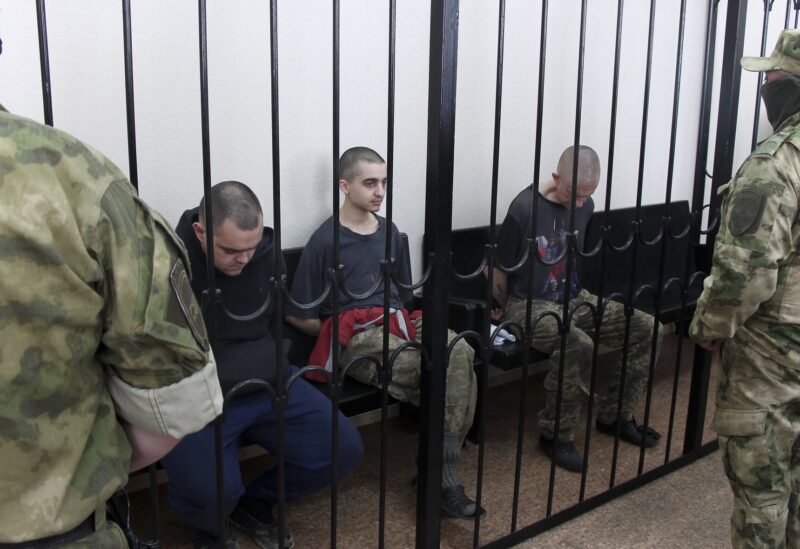 Two British citizens Aiden Aslin, left, and Shaun Pinner, right, and Moroccan Saaudun Brahim, center, sit behind bars in a courtroom in Donetsk, in the territory which is under the Government of the Donetsk People's Republic control, eastern Ukraine, Thursday, June 9, 2022. The two British citizens and a Moroccan have been sentenced to death by pro-Moscow rebels in eastern Ukraine for fighting on Ukraine's side. The three men fought alongside Ukrainian troops and surrendered to Russian forces weeks ago. (AP Photo)

Five British Prisoners who had been exchanged for Ukrainian Prisoners by Russia have returned to Britain and were eager to see their families, according to a non-profit organization called Presidium Network on Thursday.

“Presidium Network is pleased that the five British Nationals are back safely and thankful for all parties who have helped bring them back,” the organisation said in a statement.

“We know that all… (are) looking forward to normality with their families after this horrific ordeal.”

Presidium Network does relief work in Ukraine, including help with evacuations.

Aslin and Pinner were captured by Russian-backed forces in Ukraine’s coastal city of Mariupol in April and were sentenced to death by a court in the self-proclaimed Donetsk People’s Republic, one of Russia’s proxies in eastern Ukraine.

They, along with Moroccan Brahim Saadoun, were found guilty of “mercenary activities and committing actions aimed at seizing power and overthrowing the constitutional order of the DPR” — a sentence condemned by Ukraine and Britain.

Healy, a Briton providing humanitarian assistance in Ukraine, was detained in April alongside Paul Urey, who later died in detention. Harding and Hill had been fighting alongside Ukrainian forces and all three had denied being mercenaries in the Russian proxy court.