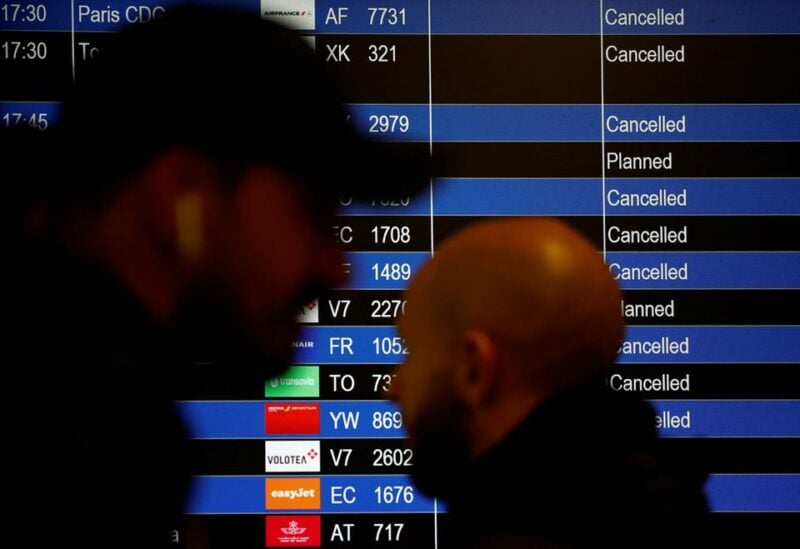 Travellers walk past a flight departure screen displaying a series of flight cancellations during an air traffic controller's strike at the Nantes Atlantique airport in Bouguenais near Nantes, France, September 16, 2022. REUTERS/Stephane Mahe

A French air traffic controllers’ strike forced airlines to cancel half of the flights scheduled to enter or depart from Paris airports, as well as others slated to fly over France, on Friday.

Strikes and staff shortages in recent months have prompted airlines to postpone thousands of flights, dashed their hopes of a summer resurgence following extensive COVID-19 lockdowns, with disruption extending into the autumn.

“It’s a little stressful, we’ll have to find a solution quite quickly because we’re expected at another hotel at another place,” Canadian traveller Cedric Jutra told Reuters.

French air traffic control union SNCTA said in a statement that the walkout by its members was over the effects of inflation and its demand for more staff members.

“It is inexplicable that thousands of European citizens/visitors will have their travel plans unfairly disrupted by yet another French ATC (air traffic control) strike,” Ryanair said.

The Irish airline said the travel plans of 80,000 passengers had been affected when it had cancelled 420 flights, mainly intended to fly over France.

Air France had said on Wednesday that it would operate only 45% of its short and medium-range flights and 90% of its long-haul flights.

“I realised this morning when I woke up that the flight had been cancelled … I managed to rebook but this is not good, as it’s the start of the day and it’s quite difficult,” said Javier Vianuevua, a Spanish passenger on a Barcelona-bound flight.

Aviation authority DGAC, which had asked airlines to halve their flight schedules, said some local airports were temporarily closed, including Montpellier and Rennes, adding there were “significant delays” across the country’s airports.

“Everything is very quiet, as the passengers had been warned in advance and did not go to the airports,” a spokesperson for Paris airports operator Groupe ADP told Reuters, adding that airlines had tended to cut short and medium services.

Low-cost carrier EasyJet said it had cancelled 76 flights due to the strike.

British Airways said it had made a small number of changes to its short-haul schedule and is offering rebooking and refund options to customers whose flights have been cancelled.

Major airports in neighboring countries also felt the impact, with Spanish airport operator AENA saying it had been forced to cancel 65 flights.