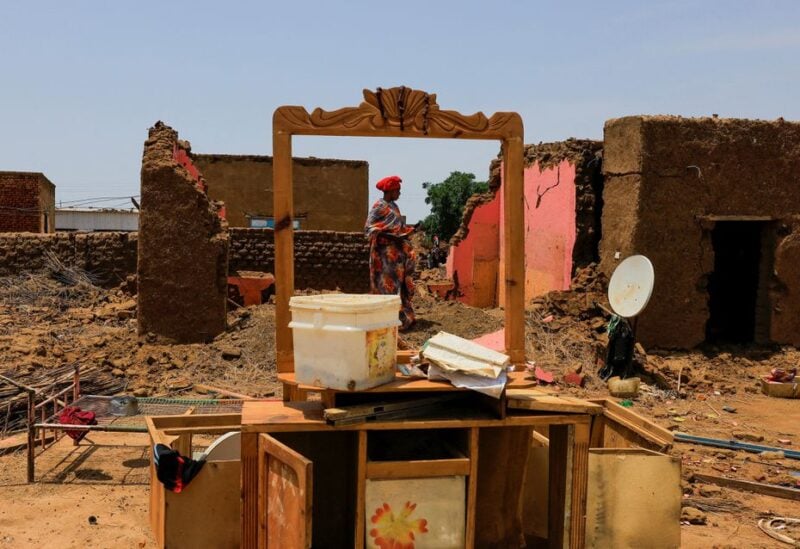 A woman collects her belongings after sustaining water damage to her house during floods in Al-Managil locality, in Jazeera State, Sudan August 23, 2022. REUTERS/Mohamed Nureldin Abdallah

Thousands of people in the farming town of Al Managil and the neighboring villages have lost homes and property in what they claim is the worst flooding in a decade after yearly rains in Sudan left dozens dead.

In the midst of her family home’s ruins, Butheyna Alhadi, 29, said Reuters, “We’ve lost everything.”

“Five families lived here and now it’s destroyed. We have no shelter and we’ve lost all our property.”

Nationwide, more than 150,000 people have been affected by flooding so far this year, double the number at the same stage of last year’s rainy season, the United Nations says. Authorities say 89 people have died and about 50,000 homes have been damaged.

By the end of the rainy season, which typically continues in September, the United Nations expects at least 460,000 people to have been hit, a higher number than most previous years, due to heavier rain as well as lack of mitigation.

In Al Managil, a farming area about 150 km (90 miles) south of the capital Khartoum and lined with overflowing irrigation ditches, Sudanese Red Crescent official Jamal Mustafa said more than 100 villages had been cut off and 10,000 homes had been damaged or collapsed. At least 3,000 people had sought shelter in makeshift camps.

Residents said they had limited access to drinking water or food, with most assistance cut off by water two metres (6.5 feet) deep in some places.

“Any aid, shelter or transportation is happening through the local volunteer effort,” said local leader Altayib Abdallah. “The government hasn’t offered any assistance.”

Sudan’s sovereign council head Abdel Fattah al-Burhan on Sunday said the government would provide the necessary assistance to Al Managil, including clearing ditches, fixing the main road to the area and providing compensation.

Trucks carrying aid from Qatar and the paramilitary Rapid Support Forces could be seen waiting for roads to clear.

Some members of the army engineering corps were seen trying to clear the main road, but locals said they had been struggling to divert water back into irrigation ditches mostly on their own.

“For the last 10 days we’ve been working day and night to stop the flows,” said Yaseen Abdalla, 35, standing knee-deep in water.