Flooding in central Appalachia kills at least 8 in Kentucky 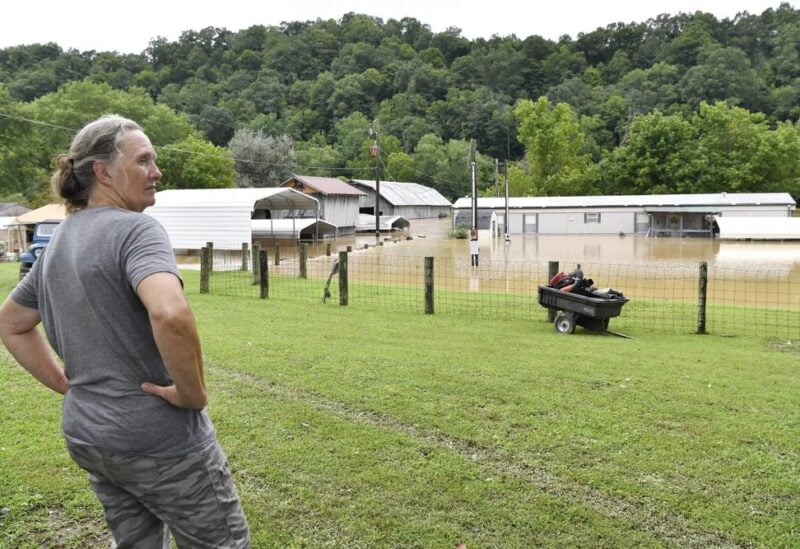 Bonnie Combs stands by and watches her property become covered by the North Fork of the Kentucky River in Jackson, Ky., Thursday, July 28, 2022. Flash flooding and mudslides were reported across the mountainous region of eastern Kentucky, where thunderstorms have dumped several inches of rain over the past few days. (AP Photo/Timothy D. Easley)

Long before daybreak, the family of Krystal Holbrook began rushing their belongings to higher ground in an effort to protect them from the southeastern Kentucky floodwaters that were threatening them.

To transfer cars, campers, trailers, and other equipment, her family rushed in the dark. However, as the water continued to rise on Thursday, at least eight people died and hundreds of people lost their houses in Kentucky; they started to fear that they could run out of higher ground.

As Holbrook put it, “We thought we had most of it pushed out of the way.” We’re still transferring cars to higher ground right now, though. It’s getting harder to find higher ground now.

The same was true throughout the region, as another round of rainfall loomed in an area already hammered by days of torrential rainfall. The storm sent water gushing from hillsides and surging out of streambeds in Appalachia, inundating homes, businesses and roads. Rescue crews used helicopters and boats to pick up people trapped by floodwaters. Parts of western Virginia and southern West Virginia were also hit by flooding.

“In a word, this event is devastating,” Beshear said Thursday. “And I do believe it will end up being one of the most significant, deadly floods that we have had in Kentucky in at least a very long time.”

Beshear warned that property damage in Kentucky would be extensive and opened an online portal for donations that would go to residents affected by the flooding.

In Whitesburg, Kentucky, floodwaters seeped into Appalshop, an arts and education center renowned for promoting and preserving the region’s history and culture.

“We’re not sure exactly the full damage because we haven’t been able to safely go into the building or really get too close to it,” said Meredith Scalos, its communications director. “We do know that some of our archival materials have flooded out of the building into Whitesburg streets.”

“We’ve got a lot of people that need help that we can’t get to at the moment,” he said. “We will.”

Flash flooding and mudslides were reported across the mountainous region of eastern Kentucky, western Virginia and southern West Virginia, where thunderstorms dumped several inches of rain over the past few days.

With more rain expected in the area, the National Weather Service said additional flooding was possible into Friday in much of West Virginia, eastern Kentucky and southwest Virginia.

Poweroutage.us reported more than 33,000 customers without electricity in eastern Kentucky, West Virginia and Virginia, with the bulk of the outages in Kentucky.

Rescue crews worked feverishly to try to reach people trapped by the floodwaters.

“There are a lot of people in eastern Kentucky on top of roofs waiting to be rescued,” Beshear said Thursday. “There are a number of people that are unaccounted for, and I’m nearly certain this is a situation where we are going to lose some of them.”

“Extreme flash flooding and mudslides are just everywhere,” Stacy said, speaking with The Associated Press by phone Thursday as he struggled to reach his office in Hazard.

The storms hit an Appalachian mountain region where communities and homes are often perched on steep hillsides or set deep in the hollows between them, where creeks and streams can rise in a hurry. But this one is far worse than a typical flood, said Stacy, 54.

“I’ve lived here in Perry County all my life and this is by the far the worst event I’ve ever seen,” he said.

Roads in many areas weren’t passable after as much as 6 inches (15 centimeters) of rain had fallen in some spots by Thursday, and 1 to 3 more inches (2.5 to 7.5 centimeters) could fall, the National Weather Service said.

Beshear said he deployed National Guard soldiers to the hardest-hit areas, and three parks in the region were opened as shelters for displaced people.

The city of Hazard urged people on Facebook to stay off roads and “pray for a break in the rain.”