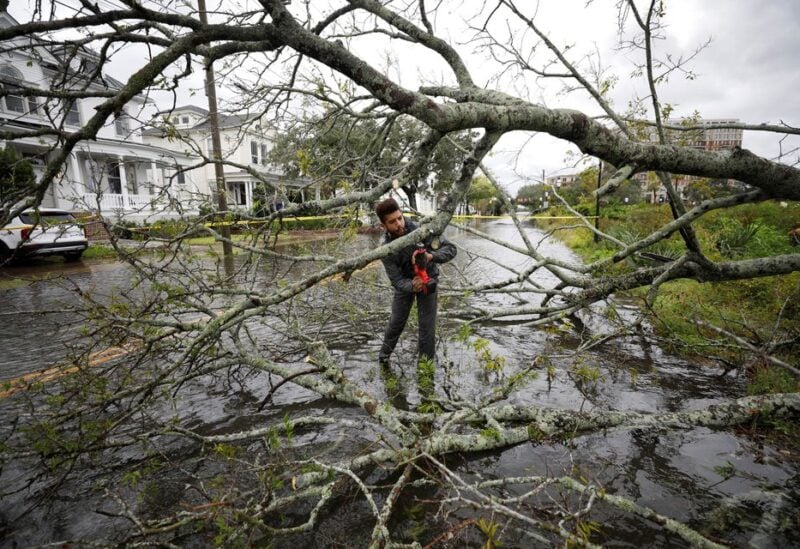 Kieran Holloway, a 25-year-old visiting from Colombia, South Carolina, volunteers to cut away a tree that fell on a flooded road, as hurricane Ian bears down on Charleston, South Carolina, U.S., September 30, 2022. REUTERS

Hurricane Ian, one of the most violent hurricanes to hit the U.S. mainland, left tens of billions of dollars in damage and an unknown death toll in its aftermath on Saturday in Florida, North and South Carolina.

According to the National Hurricane Center, Ian, now a post-tropical storm, was weakening but still expected to deliver dangerous conditions to sections of the Carolinas, Virginia, and West Virginia through Saturday morning.

The storm struck Florida’s Gulf Coast on Wednesday, turning beach towns into disaster areas, before hitting wind speeds of 85 mph (140 kph) as it pummeled waterfront Georgetown, north of the historic city of Charleston in South Carolina on Friday.

Roads were flooded and blocked by trees while a number of piers were damaged.

According to the tracking website PowerOutage.us, over 1.9 million households and businesses in the Carolinas and Florida were without power at 21:30 ET (01:30 GMT).

The number of victims and repair expenses are still unknown, but as Florida entered its third day after Ian struck, the scale of the destruction became obvious.

At least 21 deaths have been reported, according to Kevin Guthrie, head of the state’s Division of Emergency Management, during a morning briefing on Friday, but some of them remain unverified.

Some 10,000 people were unaccounted for, he said, but many of them were likely in shelters or without power.

“Those older homes that just aren’t as strong built, they got washed into the sea,” said Governor Ron DeSantis.

“If you are hunkering down in that, that is something that I think would be very difficult to be survivable.”

Meanwhile, insurers are bracing for a hit of between $28 billion and $47 billion, in what could be the costliest Florida storm since Hurricane Andrew in 1992, according to U.S. property data and analytics company CoreLogic.

“We’re just beginning to see the scale of that destruction. It’s likely to rank among the worst … in the nation’s history,” he said.