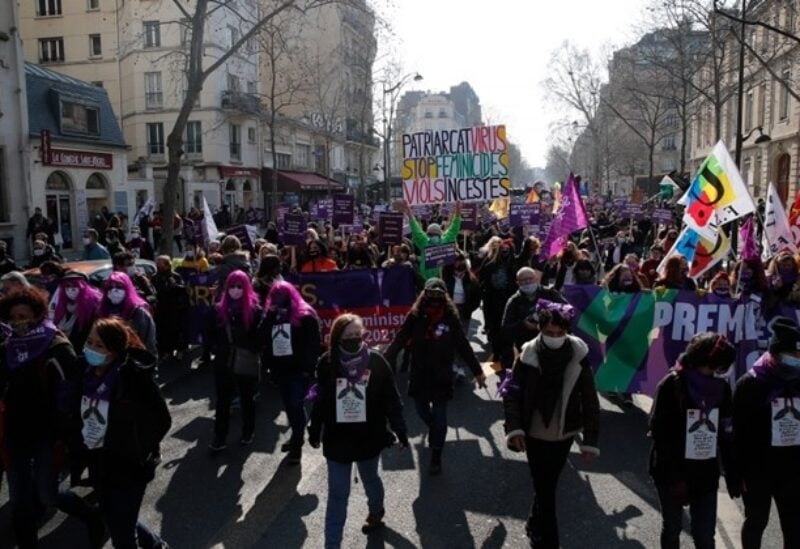 PARIS: Activists laid flowers near the Iranian Embassy in Paris Monday to show support for a women’s rights campaigner sentenced to prison after handing out flowers to women on the Tehran metro while not wearing a headscarf.

Monday’s protest on a square near the embassy, organized by Amnesty International, was timed to mark International Women’s Day. It was also meant to show support for other activists fighting for human rights in Iran.

On International Women’s Day in 2019, Yasaman Aryani, her mother Monireh Arabshahi and Mojgan Keshavarz handed out flowers to female passengers on the Tehran metro and spoke of a day when women have the freedom to choose what they wear. The activists were not wearing headscarves and posted a video showing the action that drew widespread attention.

Aryani and her mother were each sentenced to 16 years in prison for “inciting and facilitating corruption and prostitution,” though the sentence was later reduced.

Over recent years, dozens of Iranian women have been detained for protesting the mandatory wearing of the hijab. Several women’s rights activists also remain in prison, such as prominent Iranian human rights lawyer Nasrin Sotoudeh. She became known for defending activists, opposition politicians and women prosecuted for removing their headscarves

The hijab and chador – the flowing, all-encompassing robe for women – have long been parts of Persian culture. They became political symbols in 1936, when Iran’s pro-Western ruler Reza Shah Pahlavi banned the garments amid his efforts to rapidly modernize Iran. The ban became a source of humiliation for some pious Muslim women in the country.

As the 1979 Islamic Revolution took hold, Ayatollah Ruhollah Khomeini ordered female civil servants to wear the chador. The hijab and loose-fitting clothing later became mandatory for all women in Iran.