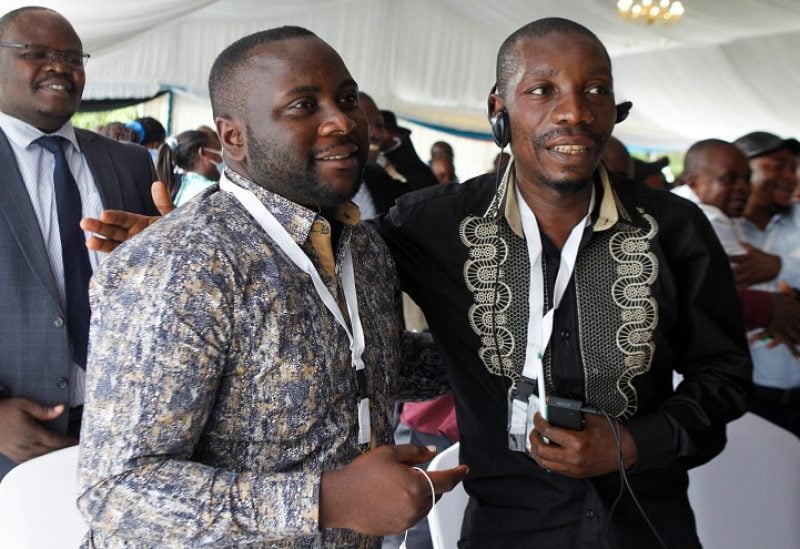 Delegates dealing with the peace process in the eastern region of the Democratic Republic of the Congo, celebrate after attending the final meeting in Nairobi, Kenya December 6, 2022. REUTERS/Monicah Mwangi

The Democratic Republic of Congo’s M23 rebel group’s spokesperson Lawrence Kanyuka said, it was willing to withdraw from their occupied territories and support regional peace-making efforts.

“The M23 reiterates its readiness to the direct dialogue with the DRC government in order to find a lasting solution to the root causes of the conflict in the Eastern DRC.”

He said the M23 group “was ready to start disengagement and withdraw”.

The statement comes just after the DRC goverment said that 272 people were killed in a massacre in Kishishe in the province of North Kivu, that the Congolese government blames on the rebel group. The DRC on Monday revised its death toll from a previous estimate of 50.

The M23 — a militia composed mostly ethnic Tutsi fighters from Congo — has denied responsibility for the attack, blaming “stray bullets” for the deaths of just eight civilians.

The UN had spoken of reports of a high number of civilian casualties on November 29 in Kishishe, but it did not give any figures.
It also coincided with reports by the AFP news agency, citing unnamed local sources, of fighting on Tuesday between Congolese troops and M23 fighters outside Bwiza in North Kivu.

Ceasefire back on the table despite violence after talks?
The conflict between the Congolese forces and M23 forces has escalated since October.

The withdrawal of M23 was a key demand made at peace talks with neighboring Rwanda last month.

On November 23, at the Mini-Summit on Peace and Security held in Angola’s Lunada, heads of state had demanded that the rebels lay down their weapons or face attack by regional military forces.

A ceasefire was agreed upon between the rebels and Congolese forces during the talks.

However, the violence in Kishishe took place less than a week after the agreement on the fragile truce.

The M23 insurgency arises from the long fallout from the 1994 genocide in Rwanda. The group claims to represent the interest of Congolese Tutsis, the ethnic group that was targeted in the genocide and to which Rwanda’s President Paul Kagame belongs, against Hutu militias.

Congo has alleged that Rwanda is providing M23 with support, a claim that UN experts and US officials have also pointed to in the last few months.

However, Rwanda denies the accusations.

On Monday, US Secretary of State Antony Blinken said he had a “productive conversation” with Rwandan President Paul Kagame during which he asked Rwanda to stop supporting the rebel group and call for its retreat.