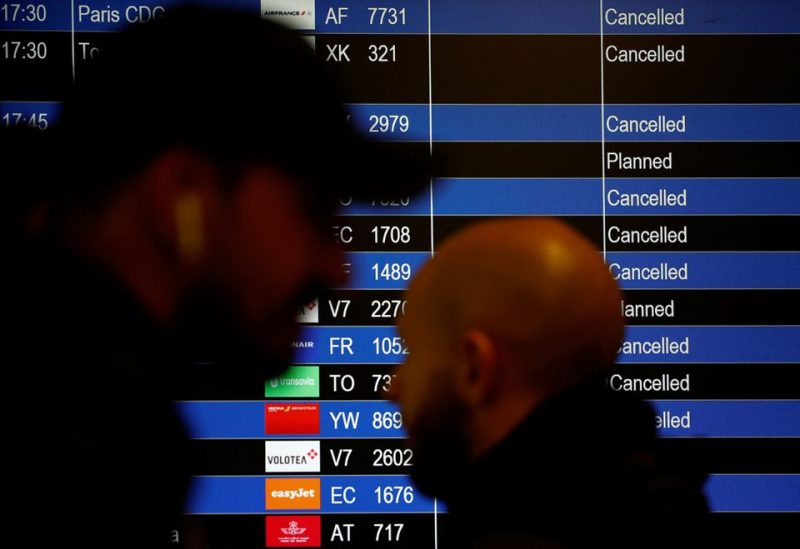 Travellers walk past a flight departure screen displaying a series of flight cancellations during an air traffic controller's strike at the Nantes Atlantique airport in Bouguenais near Nantes, France, September 16, 2022. REUTERS/Stephane Mahe

In the wake of the Unions call for a nationwide transport strike as they remain in deadlock with the government over walkouts at oil depots that have sparked fuel shortages, France was preparing for a day of major disruptions on Tuesday.

The move comes after workers at several refineries and depots operated by energy giant TotalEnergies voted to extend their strike action, said AFP.

Their industrial action has seriously disrupted fuel distribution across the country but particularly in northern and central France and the Paris region.

Motorists have scrambled to fill tanks as the fuel strike, which has lasted for nearly three weeks, cripples supplies at just over 30 percent of France’s service stations and has had a knock-on effect across all sectors of the economy.

President Emmanuel Macron’s government used requisitioning powers to force some strikers back to open fuel depots, a move that infuriated unions but has so far been upheld in the courts.

“We will continue to do the utmost,” Macron said after a meeting Monday with ministers, adding he wanted the crisis “to be resolved as quickly as possible”.

Finance Minister Bruno Le Maire earlier said it was necessary to use requisitioning powers to reopen the refineries and depots.

“The time for negotiation is over,” Le Maire told the BFMTV broadcaster.

“There was a negotiation, there was an agreement,” he added, referring to the agreement concluded last week between TotalEnergies and two majority unions, but which the hard-left CGT union rejects.

CGT boss Philippe Martinez suggested Monday that the government “get around a table” with the unions to discuss an increase in France’s minimum wage.

“Requisitioning is unacceptable and it’s never the right solution,” added Frederic Souillot, general secretary of the FO union which is also taking part in the day of strike action, the unions’ biggest challenge to Macron since he won a new presidential term in May.

The leftist CGT and FO called for a nationwide strike Tuesday for higher salaries, and against government requisitions of oil installations, threatening to cripple public transport in particular.

Unions in other industries and the public sector have also announced action to protest against the twin impact of soaring energy prices and overall inflation on the cost of living.

Suburban services in the Paris region as well as bus services will also be impacted, operator RATP said, but the inner-Paris metro system should be mostly unaffected.

Beyond transport workers, unions hope to bring out staff in sectors such as the food industry and healthcare, CGT boss Martinez told France Inter radio.

Their action will kick off what is likely to be a tense autumn and winter as Macron also seeks to implement his flagship domestic policy of raising the French retirement age.

But the economic squeeze partly caused by Russia’s invasion of Ukraine, along with the failure of Macron’s party to secure an overall majority in June legislative polls, only adds to the magnitude of the task.

The latest strike call comes after tens of thousands of protesters marched in Paris on Sunday to express their frustration at the rising cost of living.

The demonstration was called by the left-wing political opposition and led by the head of the France Unbowed (LFI) party, Jean-Luc Melenchon.

Some protesters wore yellow fluorescent vests, the symbol of the often violent anti-government protests in 2018 that shook the pro-business government of Macron.