France’s Macron sworn in for second term as president 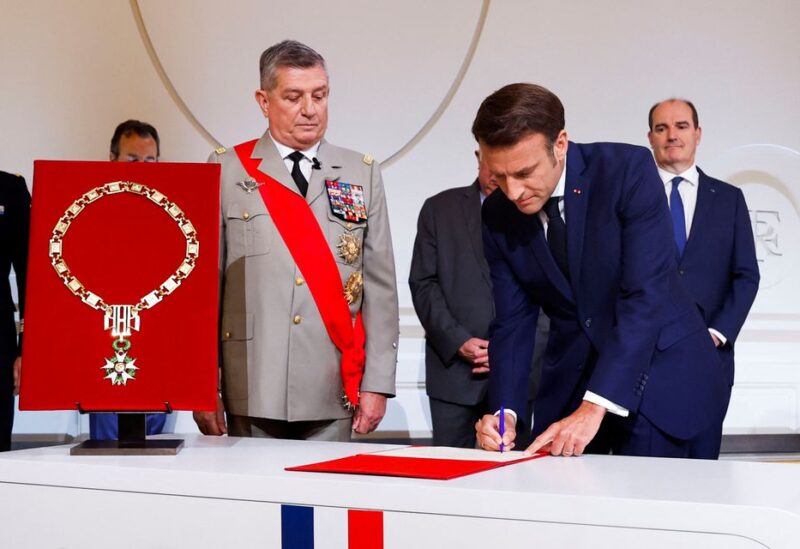 France's Military Chief of Staff to the presidency Benoit Puga stands next to French President Emmanuel Macron signing a document as he is sworn-in for a second term as president after his re-election, during a ceremony at the Elysee Palace in Paris, France, May 7, 2022. REUTERS/Gonzalo Fuentes/Pool

Emmanuel Macron was sworn in as France’s president for a second term at a ceremony at the Elysee Palace, which was followed by the firing of canons at the Invalides grounds.

Despite substantial resistance to his pro-business policies and a promise to raise the retirement age, Macron won 58.5 percent of the vote in the second round against the far-Marine right’s Le Pen.

In a short speech, he spoke of the need to innovate at a time of unprecedented challenges for the world and for France, and said his second term would be “new” and not merely a continuation of the first.

“We need to invent a new method together, far from tired traditions and routines, with which we can build a new productive, social and ecological contract,” he said, promising to act with “respect” and “consideration”.

He highlighted the threat posed by Russia’s invasion of Ukraine, and global environmental concerns.

Macron’s inauguration marks the end of one electoral campaign and the opening of another – for legislative elections in June.

A newly united political left – a coalition formed between hard-left La France Insoumise, the Parti Socialiste, the Greens and the Communist Party – is hoping to deprive Macron of a majority in parliament.

The right-wing Les Republicains was also due to hold a national council meeting on Saturday.

Macron will visit the European Parliament in Strasbourg on for “Europe Day” on Monday.

Later in the week, for the first trip abroad since his inauguration, he heads to Berlin to meet German Chancellor Olaf Scholz.

Macron, 44, is the first president who does not belong to a coalition government to be re-elected since the formation of the Fifth Republic in 1958.

Macron’s new term formally begins on the evening of May 13 and his prime minister, Jean Castex, is still in office.