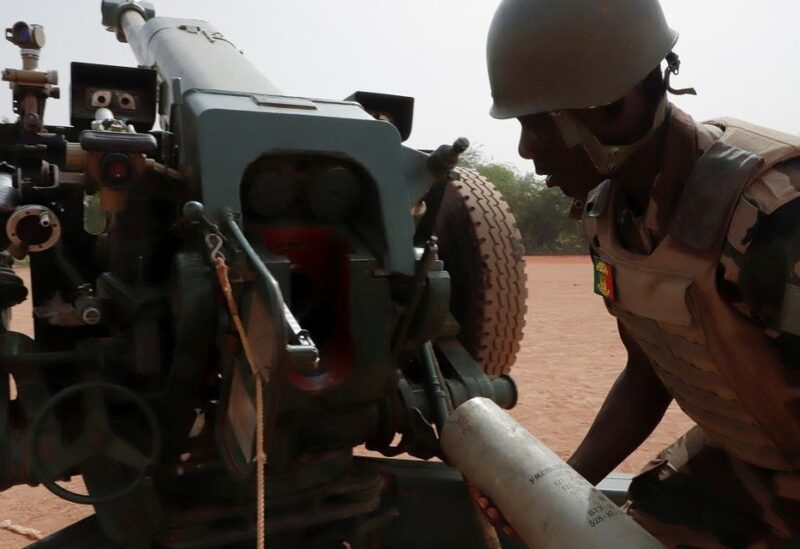 A Malian soldier of the 614th Artillery Battery is pictured during a training session on a D-30 howitzer with the European Union Training Mission (EUTM), to fight militants, in the camp of Sevare, Mopti region, in Mali, on March 23, 2021. (Reuters)

Barkhane military camp in Mali was hit by rockets, which led to the killing of a high-ranking French military personnel and nine soldiers were injured, statement from the government said on Sunday.

French President Emmanuel Macron’s office confirmed that Brigadier Alexandre Martin of the 54th Hyeres artillery regiment was killed on Saturday during a mortar attack on a camp in Gao, northern Mali.

“France is determined to continue the fight against terrorism in the region, alongside its partners,” the statement from the Elysee Palace added.

This is the first attack since France announced a military drawdown aimed at reducing troops’ deployment by 2023 and establishing a European alliance to fight terrorism.

The camp in Gao was targeted by several indirect fires, seriously wounding Brigadier Martin and nine other soldiers, a separate statement from the Defense Ministry said.

It did not reveal the exact nature or identity of the suspected extremist groups behind the attack.

Gao is the main military base for Operation Barkhane led by France alongside the G5 Sahel countries to fight armed extremist groups in the Sahel region.

Since the launch of the operation in 2014, extremist groups have carried out regular attacks on French military bases, killing over 50 French soldiers.

In recent years, France’s military presence in Mali has been denounced amid increasing political hostility and worsening military-civilian relations. Incidents like the January 2021 airstrike by the French army, which overwhelmingly killed civilians, have fueled growing anti-French sentiment in Mali.