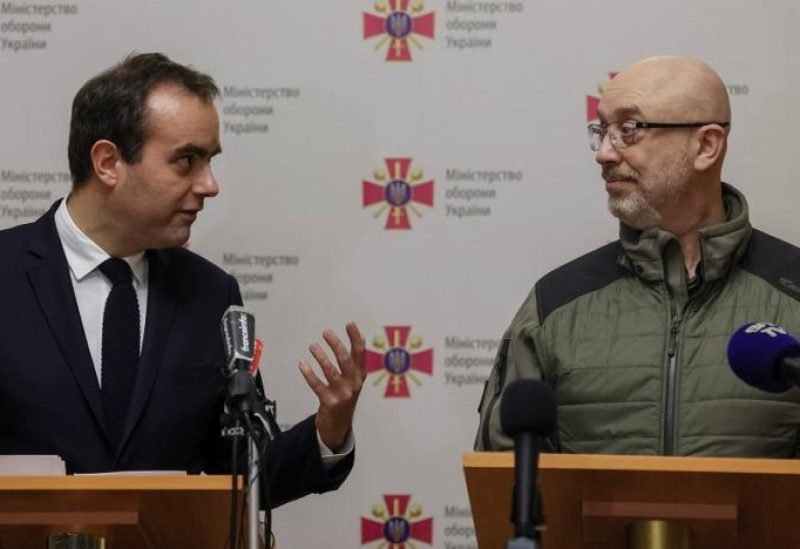 France’s defense minister on Wednesday pledged further military support for Ukraine insisting his government’s backing is unflagging while efforts are also being made with Moscow to reach an eventual negotiated end to Russia’s invasion.

French Minister for the Armed Forces Sebastien Lecornu said his trip to Kyiv was important to identify the priorities of the Ukrainian defense ministry. France’s support will include a 200-million-euro (US$212 million) fund that would allow Ukraine to purchase weapons, Lecornu said.

Lecornu traveled to Ukraine’s capital after a trip to Poland, where he announced a deal Tuesday to sell Poland two French-made military satellites.

While France has been less vocal about its military support for Ukraine than the United States and Britain, the country has sent a steady supply of weapons to Ukraine since Russia invaded on Feb. 24.

France hosted two aid conferences for Ukraine this month. But many in Ukraine remain critical of Paris’ response to the war because of President Emmanuel Macron’s efforts to maintain contact with Russian President Vladimir Putin and seek a negotiated solution.

Lecornu said France was giving military equipment from the French army to the Ukrainian army, but highlighted that this would not weaken France’s defense. France could deliver a new air-defense system in the future, officials said, without revealing details.

“And accordingly, we agreed that we will increase (the) capabilities of our air force,” he said.

Lecornu came to Ukraine a week after Zelenskyy visited the US, Ukraine’s chief ally, and amid fighting focused mostly in the country’s east but with neither Moscow nor Kyiv reporting major gains in recent weeks.

In his annual speech to Ukraine’s parliament, Zelenskyy urged the European Union to open membership talks with his country after granting it candidate status in June. He also praised relations with the US, which has promised to send powerful Patriot air defense systems to Ukraine.

“This is a special sign of trust in Ukraine,” said Zelenskyy.

While both Russia and Ukraine have said they were willing to participate in peace talks, their stated conditions remain far apart. Kremlin spokesman Dmitry Peskov reiterated Wednesday that any peace plan must acknowledge four regions of Ukraine that Russia illegally annexed as Russian territory, a demand that Kyiv flatly rejects.

Russian forces have pressed their offensive to capture all of eastern Ukraine by concentrating in recent weeks on Bakhmut, a city in Donetsk province. Ukrainian forces were pushing a counteroffensive toward Kreminna, a city in neighboring Luhansk province, in hopes of reclaiming the area and potentially dividing Russia’s troops in the east.

France has supplied Ukraine with a substantial chunk of its arsenal of Caesar cannons, as well as anti-tank missiles, Crotale air defense missile batteries and rocket launchers. It is also training some 2,000 Ukrainian troops on French soil. Macron pledged last week to provide a new injection of weapons in early 2023.

Western military aid to Ukraine has angered Moscow. On Tuesday, Russian Foreign Minister Sergei Lavrov accused Washington and NATO of fueling the war with the aim of weakening Russia and warned the conflict could spin out of control.

Russia invaded Ukraine 10 months ago, alleging a threat to its security orchestrated by NATO. The war has killed tens of thousands of people and displaced millions so far, with an end nowhere in sight.

Russian attacks on power stations and other infrastructure have left millions of Ukrainians without heating and electricity for hours or days at a time.

In the southern region of Kherson, Russian shelling hit a maternity hospital soon after two women delivered babies there, although Ukrainian officials said no one was wounded. Zelenskyy’s office later reported that shelling of a village in the area wounded three civilians, including a 14-year-old.

Ukraine’s foreign minister told The Associated Press this week that his government would like to see a peace conference by the end of February. Ukraine has said in the past that it wouldn’t negotiate with Russia before the full withdrawal of its troops, while Moscow insists its military gains and the 2014 annexation of the Crimean Peninsula cannot be ignored.

Asked about Ukraine’ intention to hold a February summit under the UN’s aegis, Kremlin spokesman Peskov said any peace plan could only proceed from the assumption of Russia’s sovereignty over the illegally annexed areas of Ukraine.