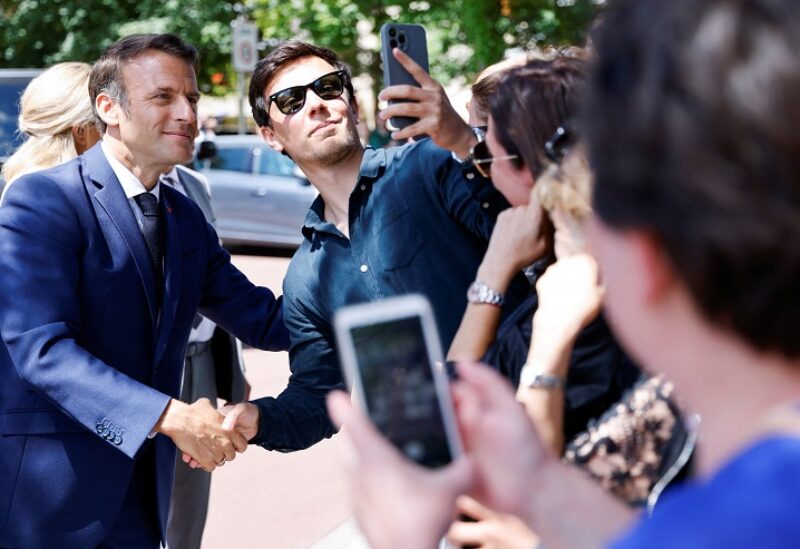 French President Emmanuel Macron poses for a picture during the first round of French parliamentary elections, at a polling station in Le Touquet, France, June 12, 2022. Ludovic Marin/Pool via REUTERS

The first round of voting in Fance’s parliamentary elections showed that French President Emmanuel Macron’s centrist alliance held a narrow lead on Sunday.

The Ensemble (Together) alliance is running neck-and-neck with the new left-wing union NUPES in initial estimates.

Current projections predict a clear majority for Ensemble in the distribution of seats after the second round of elections, which will be held in a week.

According to French media, a record 52.8% of french voters did not turn out to vote.

The first round of parliamentary elections represent a major test for Macron, who had just prevailed over far-right candidate Marine Le Pen in the presidential election in April.

The newly elected president is hoping to retain a majority in order to fulfill the transformative agenda he pledged on the campaign trail, especially on the economic front.

Despite holding a lead in today’s polls, the parliamentary majority will likely be decided in a second round of voting next weekend.

Melenchon: Macron was ‘defeated’
NUPES leader Jean-Luc Mélenchon reacted to the results of the first round by saying that Macron had been “beaten and defeated.”

“Given this result and the extraordinary opportunity it represents for our personal lives and the future of our common homeland, I call on our people to storm the polls next Sunday to reject, once and for all, the disastrous projects of Mr Macron’s majority,” he added.

Meanwhile, France’s Prime Minister Elisabeth Borne welcomed the results, saying Ensemble was “the only political force capable of getting a majority in the National Assembly.”

She urged voters to not support the left next weekend, saying France could not “risk of instability.”

“Our first common task is to persuade people back to the ballot boxes,” Borne added, urging those who abstained to vote in the second round.

Far-right leader Marine Le Pen urged her supporters to stop Macron from reaching an absolute majority. She called on her supporters to not vote for either NUPES or Ensemble candidates in run-off contests between the two.

As a result of this structure, they have been overshadowed by the presidential elections.

Legislative elections are unique in that while they occur on a national level, ultimately it is the local level constituency that organizes the vote.

Candidates are not chosen from a list but rather directly by their constituencies, like in US elections.

There are 577 seats up for grabs, including 11 for French nationals abroad. Macron’s party along with coalition allies currently hold an absolute majority of 345 seats.

Many seats still to be decided in runoffs
In the first round of voting, a constituency is won if a candidate has an absolute majority of the votes and at the same time at least 25% of the eligible voters.

History shows that this is the case in only a few of the 577 constituencies. After the first round of the 2017 general election, only four seats were determined.

This year, the majority of contests are expectd be decided in a second-round runoff between the best two performers in each voting area, where the only requirement is to win more votes than your opponent.

Macron and his allies will have to wait till June 19, when run-off elections are held in the constituencies that have not yet been decided.
Unlike in the presidential election, where Macron could only fend off far-right challenger Marine Le Pen with a disappointing 58.5% of the vote in a second round runoff, the greater challenge for the president appears to hail from the country’s far-left this time.

That’s because France’s firebrand leftist leader Jean-Luc Melenchon — who came third in the first round of the presidential election competing by himself — has managed to recruit junior electoral allies who before just a few weeks ago would have seemed unthinkable.

The center-left Parti Socialiste (PS) has been one of France’s two traditional political powerhouses. But it was decimated in recent years by Macron successfully seizing the center ground of French politics while the right and left flourished.

The socialists are now trying to rally under Melenchon’s more populist banner. France’s Green and Communist parties have also joined the “NUPES” alliance.

Polls had projected that this group would pose the main threat to Macron’s rebranded centrist Ensemble (Together) alliance.