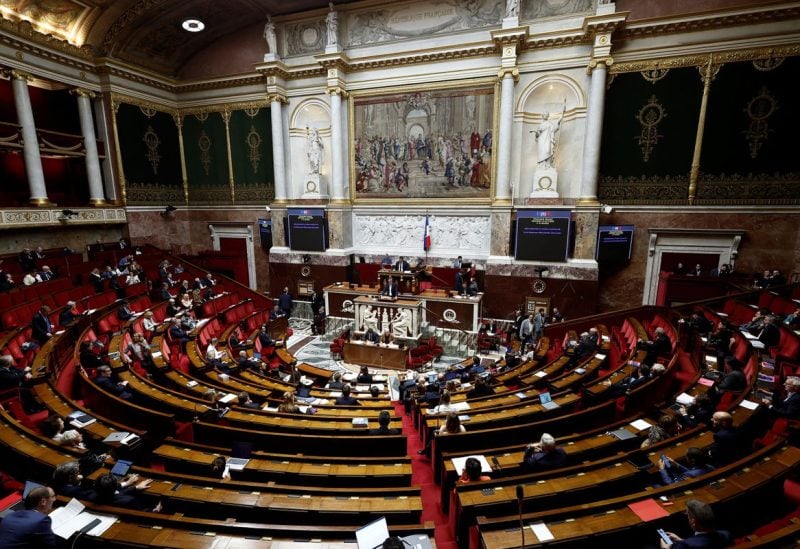 A general view shows the hemicycle as members of parliament attend a debate at the National Assembly in Paris, France, October 19, 2022. REUTERS/Benoit Tessier/File Photo

Many French lawmakers demanded harsh punishment on Friday for a far-right National Rally MP who yelled “go back to Africa!” when a Black legislator from the far left asked a question about immigration.

Gregoire de Fournas, a lawmaker from Marine Le Pen’s opposition National Rally (RN), made the remark while left-wing MP Carlos Martens Bilongo was speaking, causing an uproar and bringing the lower house of parliament to a halt on Thursday.

The centrist government, the left and the mainstream right said the remark was an unacceptable racist slur. The far right argued de Fournas was not aiming the words at Martens Bilongo but rather at migrants currently stranded on an NGO boat in the Mediterranean, and that there was nothing wrong with that.

He “obviously spoke about the migrants transported in boats by the NGOs,” Le Pen tweeted on Thursday. “The controversy created by our political opponents…will not deceive the French.”

Le Pen over the past few years has made progress in detoxifying her party’s image and convincing voters it has moved towards the conservative mainstream, and had urged her MPs to help continue this by projecting a more moderate image.

Many in the centrist government and on the left said de Fournas’ comments and his party’s reaction showed the “true face” of a party they said had not really changed.

“Mrs Le Pen has still not told this MP to leave, so she is complicit,” Interior Minister Gerald Darmanin said.

The assembly’s governing body, which includes two RN members among six vice-presidents, planned to meet at 2:30 p.m. (1330 GMT) on Friday to decide whether de Fournas would be sanctioned.

Possible sanctions, which parliament as a whole would have to confirm, include losing half his MP salary for a few weeks, and he could also be banned from parliament for two weeks.

“I have never felt such violence and such shock among all our parliamentary colleagues,” Franck Riester, minister for relations with parliament, told Europe 1 radio. “I have seen deputies in tears. This is the true face of the National Front. Finally the masks fall. The sanctions must be very strong.”

De Fournas told BFM TV on Friday that his remark was not directed at Martens Bilongo. “I was not talking about the deputy but about the boat,” he said. “It is out of the question that I step back or that I resign.”

With 89 lawmakers, the RN is the second largest party in the National Assembly.

There was considerable debate about the semantics of de Fournas’ utterance.

The RN said de Fournas was not speaking about his Black colleague.