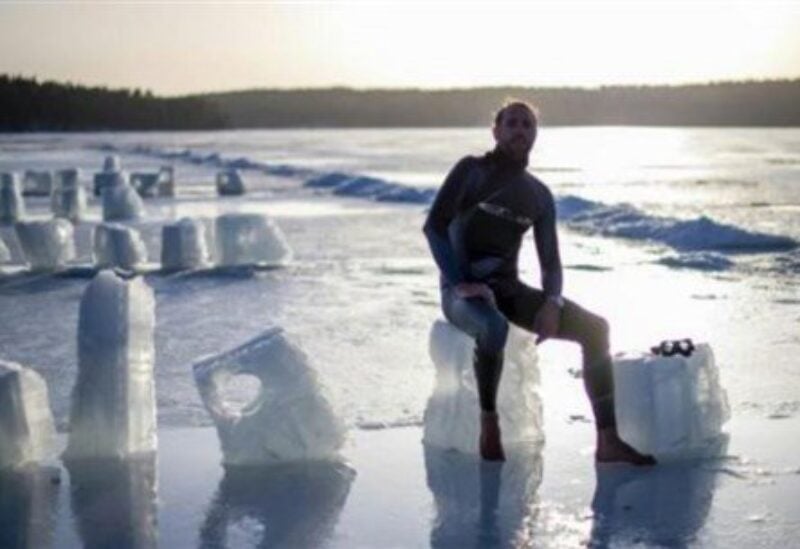 This article was published by AFP:

On Thursday, French freediver Arthur Guerin-Boeri set a new world record by swimming 120 meters (394 feet) under ice in three minutes while wearing a wetsuit but no flippers or gloves.

The impressive feat by the 36-year-old took place in a lake in Finland renowned for having some of the clearest water in the country.

The daredevil got into the freezing water wearing a heavy wetsuit and managed to swim a distance of 120 meters in one breath using a guideline, making eight holes 20 meters apart in the frozen sheet of ice covering the lake.

The five-time world champion spent two hours preparing himself before plunging into the frozen water.

He warmed up in a sauna nearby before heading to the starting stage, where he did nearly an hour of breathing exercises.

He then inflated his lungs “like a balloon,” as he told AFP, before getting into the water.

“There is fear, anxiety and it’s something I dreaded quite a bit but it was a calculated risk for which I was prepared,” he said.

“I manage to lower my stress level and then I let myself get carried by something that transcends me.

“It’s all quite mystical but necessary when achieving something like this.”

He said during his record three minutes under water he pushed forward using the cable above him as a guide.

“Under the ice I felt pretty good,” he said. “There was this diffuse lunar light that was amazing. It’s beautiful.”

He said he did not suffer much from the cold and planned to try and set another world record in a year, this time wearing a bathing suit.