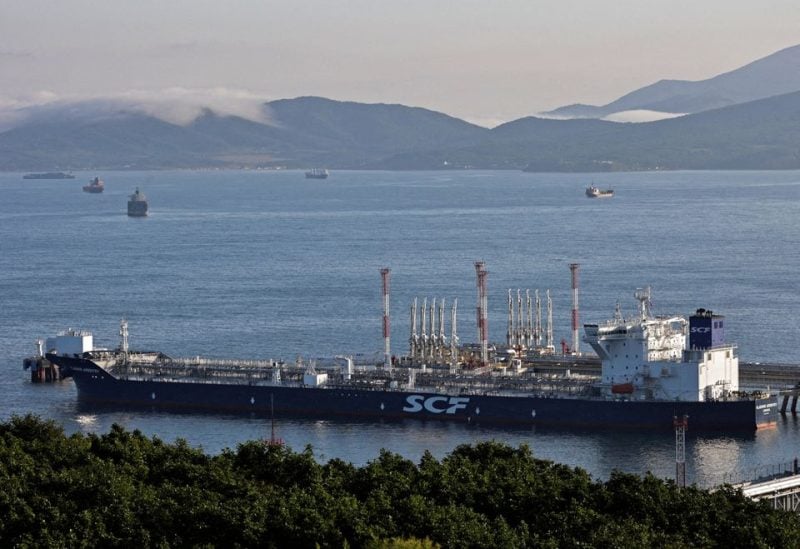 An aerial view shows the Vladimir Arsenyev tanker at the crude oil terminal Kozmino on the shore of Nakhodka Bay near the port city of Nakhodka, Russia August 12, 2022. REUTERS/Tatiana Meel//File Photo

The G7 price ceiling on Russian seaborne oil went into effect on Monday in an effort by the West to restrict Moscow’s capacity to finance its conflict in Ukraine. Russia has stated that it will not comply with the measure, even if it means reducing production.

After European Union members overcame resistance from Poland, the G7 countries and Australia agreed on Friday to a $60 per barrel price restriction on Russian seaborne crude oil. Russia is the second-largest oil exporter in the world.

Ukrainian President Volodymyr Zelenskiy said the world had shown weakness by setting the cap at that level while Russian Deputy Prime Minister Alexander Novak said on Sunday it was a gross interference that contradicted the rules of free trade.

“We are working on mechanisms to prohibit the use of a price cap instrument, regardless of what level is set, because such interference could further destabilise the market,” said Novak, the Russian government official in charge of its oil, gas, atomic energy and coal.

“We will sell oil and petroleum products only to those countries that will work with us under market conditions, even if we have to reduce production a little,” he said.

The G7 agreement allows Russian oil to be shipped to third-party countries using G7 and EU tankers, insurance companies and credit institutions, only if the cargo is bought at or below the $60 per barrel cap.

Industry players and a U.S. official said in October that Russia can access enough tankers to ship most of its oil beyond the reach of the cap, underscoring the limits of the most ambitious plan yet to curb Russia’s wartime revenue.

According to Zelenskiy, the $60 cap would do little to deter Russia from waging war in Ukraine. “You wouldn’t call it a serious decision to set such a limit for Russian prices, which is quite comfortable for the budget of a terrorist state.”

The United States and its allies have imposed sweeping sanctions on Russia since it invaded Ukraine on Feb. 24 and sent billions of dollars in aid to the Ukrainian government.

French President Emmanuel Macron, however, drew criticism from Ukraine and its Baltic allies over the weekend for suggesting the West should consider Russia’s need for security guarantees if it agrees to talks to end the war.

Zelenskiy’s aide, Mykhailo Podolyak, said the world needed security guarantees from Russia, not the other way around.

In Ukraine, Russia has been pounding power infrastructure since early October, causing blackouts and leaving millions without heating as temperatures plummet.

Russia says the assaults do not target civilians and are meant to reduce Ukraine’s ability to fight.

Ukraine says the attacks are a war crime.

Zelenskiy, in a video address on Sunday, urged citizens to be patient and strong in resisting the rigours of winter.

“To get through this winter, we must be even more resilient and even more united than ever,” he said.

Kyiv Mayor Vitaliy Klitschko said on Telegram that blackouts would be confined from Monday to planned “stabilisation” cutoffs to get the grid working again, but added the situation remained “difficult”.

In Kherson, largely without power since Russian forces abandoned the southern city last month, the regional governor said 85% of customers had electricity.

On the battlefront, Zelenskiy said Ukrainian forces were holding positions along the front line, including near Bakhmut, viewed as Russia’s next target in their advance through Donetsk.

Ukraine’s military said Russian forces were pressing for improved tactical positions to advance in the Bakhmut and Avdiivka directions. About 16 settlements, including Bakhmut and Avdiivka, were shelled by tanks, mortars, barrel and rocket artillery, the General Staff of Ukraine’s armed forces added.

Russia’s defence ministry said its troops were conducting successful operations in the area of Bakhmut and had pushed back Ukrainian attacks in the Donetsk direction.

Russian-installed officials in the occupied Donetsk said Ukraine fired at least 10 Grad rockets into the city. There was no word on casualties.

In Kryvyi Rih, among the largest cities in southern Ukraine, Russian rockets killed one person and wounded three just after midnight, the governor of the Dnipropetrovsk region, Valentyn Reznichenko, said.

“They aimed at an industrial enterprise,” Reznichenko said on the Telegram messaging app without giving details.

The head of U.S. intelligence said fighting in Ukraine was running at a “reduced tempo” and that militaries on both sides were looking to refit and resupply to prepare for a counter-offensive after the winter.