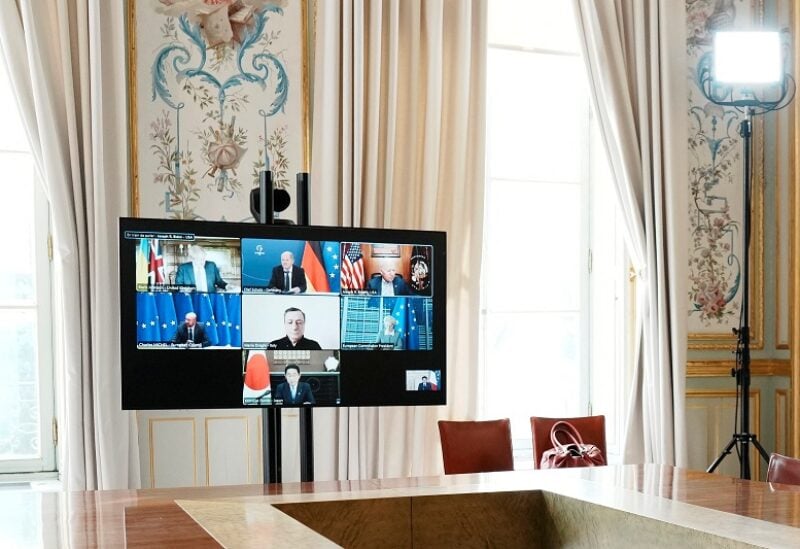 A general view of the video screen of G7 leaders during a video-conference on Ukraine at the Elysee Palace, in Paris, France, May 8, 2022. Thibault Camus/Pool via REUTERS

In a new sanction against Moscow’s war on Ukraine, the G7 countries on Sunday pledged to ban imports of Russian oil

“We commit to phase out our dependency on Russian energy, including by phasing out or banning the import of Russian oil,” said a written statement by the leaders of the Group of Seven countries after an online meeting, which was also joined by Ukraine’s President Volodymyr Zelenskyy.

The actions of the Russian president in Ukraine bring shame on both Russia and the historic sacrifices of its people, according to the leaders’ statement.

Aiming for Russia’s isolation across all sectors of its economy, the G7 countries said they will also take measures to “prohibit or otherwise prevent the provision of key services on which Russia depends.”

They reiterated their commitment to continue actions against Russian banks connected to the global economy and systemically critical to the Russian financial system.

“We will continue our efforts to fight off the Russian regime’s attempts to spread its propaganda. Respectable private companies should not provide revenue to the Russian regime or to its affiliates feeding the Russian war machine,” the statement said.

“We will continue and elevate our campaign against the financial elites and family members, who support President (Vladimir) Putin in his war effort and squander the resources of the Russian people. Consistent with our national authorities, we will impose sanctions on additional individuals,” it added.

The leaders also reiterated their condemnation of Russia’s attacks on Ukraine, which started on Feb 24, and have left 3,309 civilians dead and 3,493 others injured, according to UN estimates. The true toll is feared to be much higher.

The seven members (UK, US, Canada, Japan, Germany, France and Italy, plus the EU) are all bound by shared values as open, democratic, and outward-looking societies, according to the G7’s website.

Anadolu Agency website contains only a portion of the news stories offered to subscribers in the AA News Broadcasting System (HAS), and in summarized form. Please contact us for subscription options.