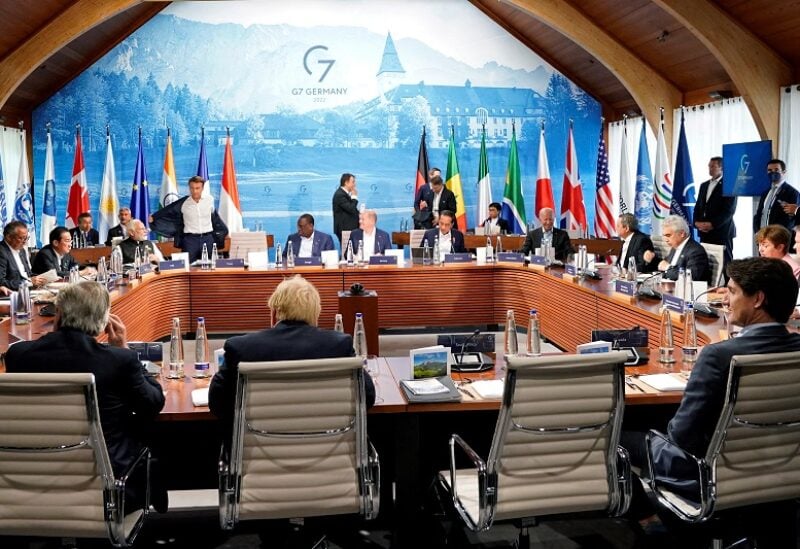 FILE PHOTO: The Group of Seven leaders gather for a lunch at the Schloss Elmau hotel in Elmau, Germany, June 27, 2022. Susan Walsh/Pool via REUTERS/File Photo

For weeks, the cobblestone streets of the ski town near the Zugspitze, Germany’s highest peak, have been overrun with police officers and organizers tasked with pulling off this year’s Group of Seven gathering.

Speaking on the final of the three-day event at the nearby Schloss Elmau hotel, host and German Chancellor Olaf Scholz seemed to be smiling through the pain as well. His arrows? Energy prices, inflation, climate change and, above all, the war in Ukraine.
On energy, the leaders of the G7 — made up of Germany, France, Italy, Japan, Canada, the US, the UK and special member the EU — used their time together in the mountains to consider how to bring down the high cost of energy while still respecting commitments to reducing reliance on fossil fuels.

To the chagrin of environmental activists, the group came out of the summit with a softened stance on the latter, saying the war in Ukraine means that time-limited support for new natural gas extraction projects may be necessary.

“Gas will be needed temporarily and that is why there may be investments that make sense, in this transitional phase, and that therefore may need to be supported,” Scholz told reporters on Tuesday.

Oil price cap still in process
As for the high cost of energy, an idea to cap the price of Russian oil had caused a stir in the days leading up to the summit. Embargoes on oil from Russia over the war in Ukraine have had the unintended but foreseeable effect of driving up the global price of crude, to the benefit of key exporter Russia. A cap could bring down energy prices for consumers and businesses while also hitting Russia’s war chest.
Despite their apparent enthusiasm, the leaders ultimately announced merely an agreement to “explore” a ban on transporting Russian oil sold above a certain price.

“The idea to put a cap is a very good one,” French President Emmanuel Macron said Tuesday, but he warned of a “technical difficulty” in implementing it.

The event did produce an agreement by at least some of the group’s members to stop buying newly mined gold from Russia, one of the world’s biggest producers.

Little relief for hunger
Along with hurting Russia, the summit also focused on helping Ukraine. Leaders promised over €30 billion ($31.6 billion) in budgetary and humanitarian support.

To fight an ever-growing global hunger crisis, intensified by fallout from the war, the G7 also said it would provide $4.5 billion (€4.3 billion) for hunger relief. Activists criticized the announcement.

“The $4.5 billion pledged is far too little to end the global food crisis and prevent people from continuing to go hungry,” Charlotte Becker, advocacy and campaign director at Oxfam, said in a statement. “At least an additional $28 billion is needed to end hunger and fund the United Nations’ appeals for help.”

An informal club of some of the world’s wealthiest countries, the G7 is regularly criticized for its outsize influence on the global economy and lack of follow-through on commitments. While, according to World Bank figures, its members’ combined GDP accounts for a significant 45% of the global economy, the growth of other economies has brought that number down from nearly 70% thirty years ago.
The group is increasingly concerned about China’s growing role on the world stage, particularly since the launch of Beijing’s Belt and Road Initiative. The infrastructure project has invested or loaned out billions of dollars to poorer countries in recent years.

Anxiety about China cropped up over and over at the summit. On Monday, G7 leaders unveiled a plan to mobilize $600 billion in public and private money for its own investment in infrastructure projects in developing countries.

European Commission President Ursula von der Leyen said the measure was meant “to show our partners in the developing world that they have a choice.”

It’s a plan that sounds familiar to some.

“That was a big topic on the agenda last year,” Stormy-Annika Mildner, executive director at the Aspen Institute Germany think tank, told DW. “And not a lot has happened since then. Now they’ve created a new alliance, which I have to say sounds a little like what they created last year. But it seems to be more concrete.”