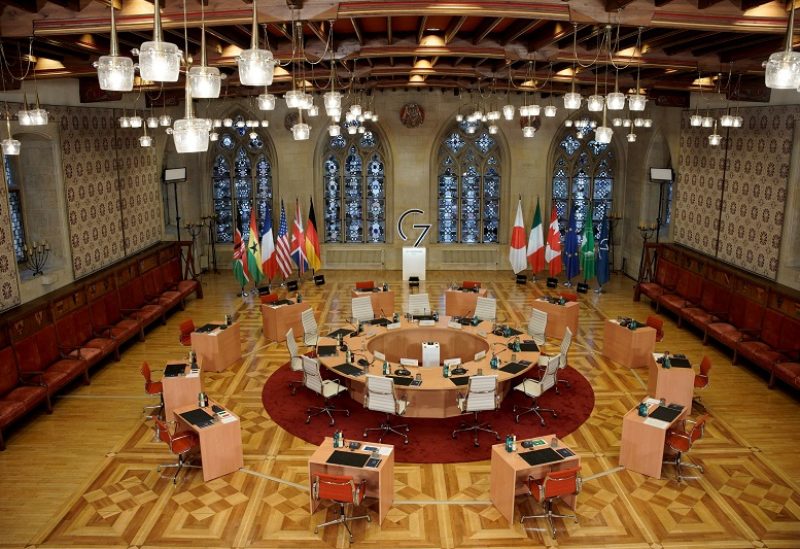 A general view of an empty room with the round table for a working session at a G7 Foreign Ministers Meeting, at the City Hall in Muenster, Germany November 4, 2022. Bernd Lauter/Pool via REUTERS

The G7 criticized Tehran’s “destabilizing activities in and around the Middle East,” denouncing the Iranian regime’s deadly crackdown on the wave of protests sweeping the country.

“We condemn the brutal and disproportionate use of force against peaceful protesters,” the Foreign ministers said after talks in Germany.

“We advocate the right of all Iranians to access information, and we deplore the Iranian government’s erosion of civil space, and independent journalism, its targeting of human rights defenders, including by shutting down the internet and social media,” they said.

The G7 also criticized Tehran’s “destabilizing activities in and around the Middle East,” such as the supply of weapons, including drones, “to state and non-state actors.” Ministers said: “Such proliferation is destabilizing for the region and escalates already high tensions.”

Nationwide demonstrations erupted throughout Iran after the Sept. 16 death in morality police custody of Mahsa Amini, 22, a Kurdish woman who had been detained for wearing her hijab in an “insufficiently modest” manner. Protesters, many of them women, have defiantly removed their headscarves, cut their hair in public, and called for the removal of Iran’s Supreme Leader Ayatollah Ali Khamenei.

Security forces have responded with a brutal crackdown in which more than 500 people have been killed and at least 25,000 arrested, according to dissident groups. The protests continued on Friday in the cities of Zahedan, Khash and Saravan in Sistan-Baluchistan, an impoverished province near the border with Pakistan and Afghanistan that has been a hotbed of unrest.

Several people were injured in clashes when protesters attacked a government building in Khash and torched several vehicles, and security forces opened fire. Video footage online showed a burned bank and damaged storefronts in Khash after the unrest, with dark smoke billowing from a building.

A senior cleric in Zahedan urged Iran’s rulers to hold a referendum to find out what Iranian people wanted.“You should resolve your problem with this nation which once gave you your legitimacy,” Molavi Abdolhamid said during Friday prayers. “The majority of people are dissatisfied now. If you disagree, then hold a referendum with international observers.”

Elsewhere in Iran, there were state-sponsored rallies on Friday marking the 1979 seizure of the US embassy in Tehran, when 52 Americans were held hostage for 444 days. State television showed anti-American demonstrations attended by tens of thousands of people across the country on the “National Day of Fighting Global Arrogance,” while songs called for “Death to America.”