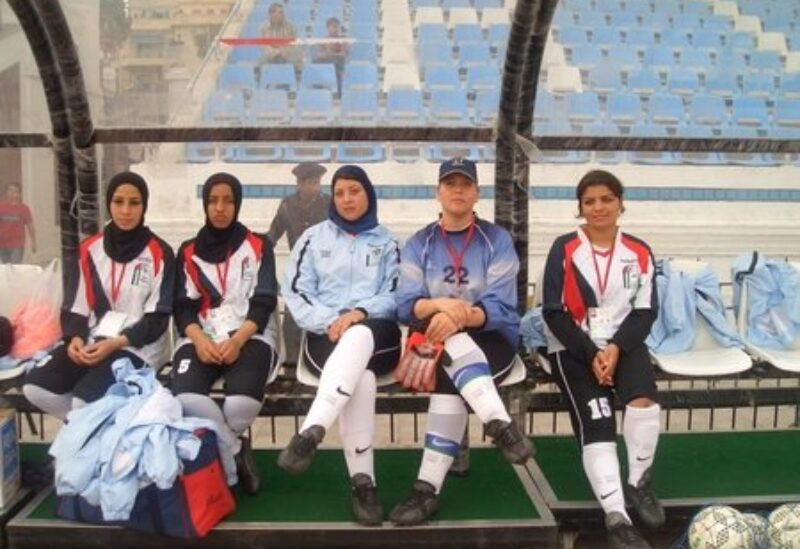 Alongside the ancient Roman ruins of the Amman Citadel, five women clad in black Adidas tracksuits and Palestinian keffiyehs walked confidently onto a makeshift football field.

As the first women’s football team from a camp for refugees from Gaza, their journey to get to the Global Goals World Cup (GGWC) in Jordan – a five-a-side recreational football tournament for all-women teams – was anything but simple.

Each of the players overcame significant adversity, including pressure from family members, to make it to the tournament.

Their team captain, Marwa Salem, was six years old when her older brother introduced her to the game of football. The siblings would play together all the time, losing themselves in the sport to escape the harsh realities of life in the camp.

Situated in Jordan’s Jerash valley, Gaza camp is home to over 40,000 Palestinian refugees from the Gaza Strip. The majority of residents are not entitled to Jordanian citizenship, meaning they cannot legally work and lack access to government health insurance and support programmes. It is regarded by the United Nations as one of the poorest Palestinian camps in Jordan.

“The only time I was happy and forgot about the issues in the camp was when I played football,” said Marwa, 23. “As refugees in the camp don’t have the right to work, they have lots of free time which attracts them to drugs and crime. But when they have football they can spend their free time doing something good and healthy for themselves.”

However, as Marwa grew up, she realised that the freedom her brother had when it came to playing football did not apply to her. While boys could go outside and play without a thought, girls always had to ask permission. And the answer was usually no.

“The women were really excited to play, but everyone was really against it. I think they feel sports gives women more freedom and they didn’t like that,” she said.

But Marwa was undeterred by the narrow confines placed upon women in her community. A year ago, through the local charity Amani, she founded the first women’s football team in Gaza camp.

Their aim was to compete in the GGWC. With tournaments taking place in Morocco, Saudi Arabia, Nigeria and Norway, alongside Jordan, each team plays for one of the UN’s Sustainable Development Goals.

The team from Gaza camp played for gender equality, under the team name #LetGazaLive.

The women faced a lot of criticism within the community, and some of Marwa’s teammates – under pressure from their families – stopped playing.

Many of the women persisted however, training each week to hone their skills for the competition. Over time, they formed a strong team of eight women, and the attitudes around them became less hostile.

“Our kids now encourage us and they are proud of us. Before, they criticised us for playing,” said Amani Abu Taima, one of the players on the team.

In May 2021 the competition took place, with eight teams competing under Jordan’s summer sun at the Citadel, perched atop one of Amman’s seven hills.

The women arrived from Gaza camp by bus, singing and dancing to the traditional dance of Dabke with their young children in tow. They waved Palestinian flags and called out in support of Gaza.

The competition coincided with heavy Israeli bombardment and a rising death toll in the Palestinian enclave.

Even among their competitors there was a strong sense of unity and support for the Gaza team.

There was a fierce determination in each of the players as they stepped onto the field. They were there to prove the critics wrong and were propelled onwards by a cause they deeply believed in.

The determination was effective and after four matches they qualified for the quarter finals.

But their journey at the GGWC ended when they lost that match 5-2 to Plasticas, a team from Amman playing to raise awareness of the environment.

Nevertheless, the women walked away with the Action Champion cup and Marwa won an individual award for her effort on the field.

Ultimately they had experienced a victory, perhaps not on the scoreboard but by taking those first fundamental steps towards their goal of equality in sports.